The Jagged Ivory Interview with Otis and Noah Ivory 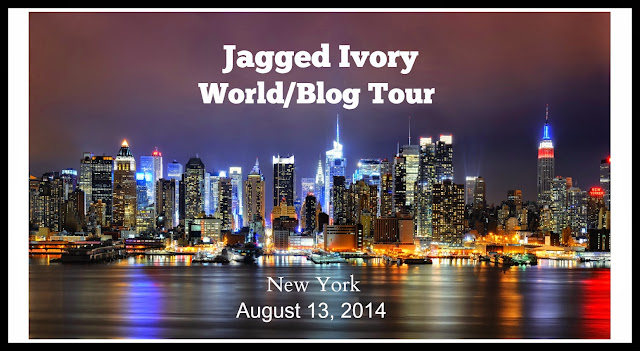 RMR: Hello, this is the Roving Musical Reporter, and I am standing backstage at the Jagged Ivory concert in New York City. Miracle of miracles, I managed to snag brothers Otis and Noah Ivory the very second they stepped off the stage, and they both graciously agreed to talk to me for a moment!
Guys, that show was AMAZING! Simply incredible, just over two full hours of non-stop adrenaline. Incredible!
Otis: Thank you.
Noah: Thanks a lot.
RMR: What does that feel like? To have an entire sold-out stadium-full of fans, all rocking to your music?
Otis: Oh, it’s an indescribable feeling. The energy and the passion coming from the crowd, their enthusiasm, it’s … there’s no other feeling like it.
RMR: I can't imagine. And what about that crazed fan who jumped up on the stage during “Rev Your Engine”? I was cringing and holding my breath just watching, but you guys never seemed to be the least bit fazed about that! You just kept right on playing. Otis, you even started dancing with her!
Otis: [Laughs]
Noah: That sort of thing has happened before. And when it does, you know, it’s usually harmless. I mean … if someone wants to get up onstage and dance, that’s not a big deal. Now, if they want to get up onstage and try to take my guitar … well, then we got a problem, ‘cause I’m sorta playing it!
Otis: Security freaks out when the fans climb up onstage like that, but … we all get a big kick out of it.
RMR: Well, it was certainly entertaining, and you are quite the dancer, sir! Okay, one last question, guys because I know you’re tired … but can we talk a minute about those unauthorized biographies that author Lashell Collins wrote about each member of the band? Some have called them quite scandalous. Any thoughts?
Otis: As long as she spelled my name right, I don’t really give a crap.
RMR: Really? Even though she goes into detail about your sex tape, and all the band’s troubles?
Otis: [Shrugs his shoulders]
Noah: You know how you always hear celebrities say, ‘Oh, I didn’t read it, I didn’t read it.’ Well … I actually did read it. In fact, I read them all.
RMR: Did you?
Noah: Well, yeah. I mean, there was all this buzz about them, so … I just figured it would be good to know what was in them. And in all honesty, I actually think Ms. Collins was pretty fair.
RMR: Really?
Noah: Yeah. She didn’t use any sensationalism, she just told it like it was, good and bad … and I can’t fault her for that, you know? And I want to say to all of the Jagged Ivory fans out there, please stop sending Ms. Collins all the hate mail on our behalf, okay. That’s not cool.
RMR: Wow. I’m sure Ms. Collins is going to really appreciate that ringing endorsement.
Noah: It’s not an endorsement. I'm just saying that I don’t think she deserves the backlash she’s getting, that’s all. I think her books were a pretty accurate portrayal of the band.
RMR: Are you hinting that there may have been some cooperation with Ms. Collins from the Jagged Ivory members?
Otis: That's not what he said.
Noah: Please don't misquote me. I'm not saying that any JI member collaborated with Ms. Collins or contributed to her books in any way. I'm just saying I think she did a fair job.
RMR: And there you have it, folks! Noah Ivory’s take on the scandalous Jagged Ivory books by Lashell Collins from the man himself! Thank you so much for talking with me, gentlemen. And thanks even more for that amazing performance tonight!
Otis & Noah: Thank you.
RMR: And you can check out The Essential Jagged Ivory boxed set and get all five of the Jagged Ivory books for one crazy low price. But hurry, because that price won't last! When the Jagged Ivory summer tour is over at the end of August, the sale goes bye bye! 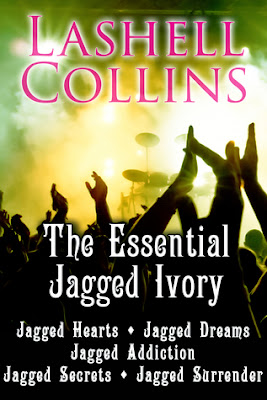 Sneaking around with the manager’s daughter. Hollywood marriage bust-ups. Drug addiction and rehab. Secrets and lies, and sex tapes. And that’s just scratching the surface of what goes down when the world’s biggest rock band goes on tour for the summer!
Noah, Cory, Benji, Buzzy and Otis are Jagged Ivory, the hottest rock band on the planet. But they’re also a family who takes care of one another through thick and thin, blood and sibling rivalry be damned. Sexy, fun and irresistible, these guys rock hard, party hard, and love even harder! Come meet the boys of Jagged Ivory, and the women who love them, and let them rock your world!
Join Jagged Ivory on their summer world tour and get all five books in this rock star series - Jagged Hearts, Jagged Dreams, Jagged Addiction, Jagged Secrets and Jagged Surrender - The Essential Jagged Ivory.

For excerpts from The Essential Jagged Ivory click here 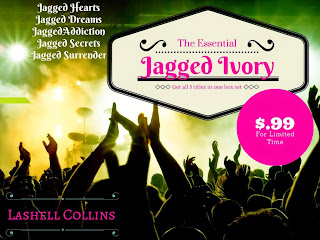 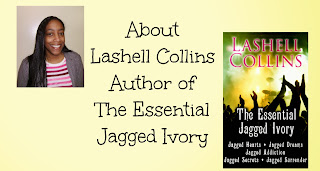 Lashell Collins spent the last twenty years of her life working in Veterinary Hospitals and Garden Centers. But whether she was surrounded by the adorable puppies and kittens she helped care for, or by the beautiful flowers, trees and shrubs, she constantly pursued her favorite pastime – reading romance novels and imagining herself as the heroine in each and every one of them. She began writing as a way to work through her grief after the loss of a few people who were special to her, and she found it to be cathartic, so she kept at it. She self-published her first novel in 2013. Since then, Lashell has self-published ten titles across two series – the Pierced Trilogy (romantic suspense), and the Jagged Ivory Series (contemporary romance) – and is hard at work on another two series for this year. All of Lashell’s stories are full of heart and romance, with smart dialogue and spicy sex scenes.
When she’s not writing, Lashell enjoys reading, shopping, eating Chinese food, and riding on the back of her husband’s Harley-Davidson. She loves watching General Hospital and Grimm. She is a huge music fan and is completely obsessed with Slash. Lashell is a member of the Romance Writers of America. Drop her a line; she loves to hear from readers. 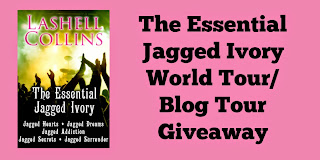