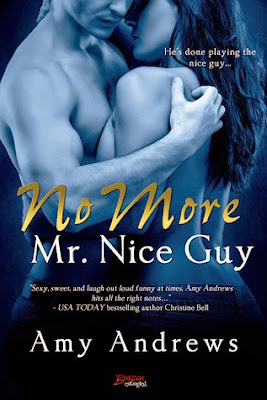 Veterinarian Mack Kennedy can't believe Josie wants to ditch her sweet, girl-next-door lifestyle. Even worse, that she'd consider doing it with anyone but him. When she leaves for London they'll go back to being 'just friends' but until then, he's going to show her just how bad nice guys can be.

And it's the perfect plan, as long as no one finds out... and no one falls in love.

REVIEW
I seriously loved No More Mr. Nice Guy by Amy Andrews.  Mack Kennedy is one of my favorite Brazen heroes because he's real.  He's not some crazy strong dominating alpha who has to have things his way.  He's not a guy who is broken and needs to be put back together again because of a tragic past or horrible upbringing.  He's simply a really nice guy who got cheated on and is trying to deal with it.  Mack is everything I could want in a man.  He's nice, but has the ability to dominate and talk dirty when the time calls for it.  He's compassionate and caring.  And oh my gosh, he has an Australian accent.

Josie Butler as with a lot of heroines I’ve read, doesn't want to be her mother. Growing up, Josie watched her mother go from man to man, looking for love in all the wrong places.  Josie resigned herself to having a nice safe man in her life.  So, for the last five years, she did.  But when her boyfriend proposed, she realized she didn’t have passion in her life or love for him the way he deserved to be loved.  So, she broke things off.

During a night of drinking with her best friend Sal, Mack’s younger sister, she creates a sexual to-do list.  The list is made up of things that would allow Josie to step out of the “good girl” role she has always been in her whole life.  In her mind, she needs to have a “bad boy” to help her fulfill the items on the list.  In an embarrassing moment, Mack finds her list and realizes he is the man who can help her check items off the list.

What transpires between Mack and Josie is simply amazing.  Josie helps Mack get over his broken heart and Mack helps Josie to explore her sexual side. Neither expected what was supposed to be a short fling to turn into more.

I’m so looking forward to more from Amy.

Purchase No More Mr. Nice Guy from Amazon or your favorite eRetailer

Click here for the hero bio on Mack Kennedy