Review ~ ONE NIGHT OF SCANDAL by Elle Kennedy 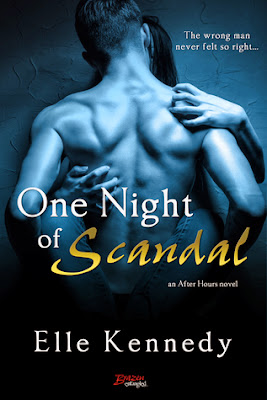 
Ex-fighter Reed Miller has been secretly lusting over his best friend’s girl for months, but he refuses to jeopardize a friendship over a woman—especially one who doesn’t like him all that much. Now that Darcy’s on the market again, it’s even more imperative to stick to his strict hands-off policy. But the sizzling attraction between them is too powerful to ignore, and once he’s had a taste of her…all bets are off.


Darcy Grant is tired of walking the straight and narrow path. She’s on the hunt for passion, and there’s no denying Reed is just the man to give it to her. Although she has no interest in dating a bad boy, and certainly not her ex’s best friend, it’s impossible not to melt beneath Reed’s skillful touch. Now it’s just a matter of setting a few ground rules—and hoping her rule-breaking, sweet-talking bad boy agrees to follow them. But if she lets Reed into her bed, does she stand a chance of keeping him out of her heart?

There are not enough words to express how excited I was to read this book. One Night of Scandal is the follow up to One Night of Sin.  Both books are standalones.  In One Night of Sin, you get introduced to Gage Holt, Reed Miller and AJ Walsh.  All three men are friends and former MMA fighters.  They are also business partners in a nightclub called Sin.  It goes without saying that I fell for all three.  Thus, explaining why I was excited for Reed’s story.

When Reed spots Darcy at a competing nightclub, flirting with another man, his first instinct is to protect his friend’s interest.  Reed is out of the loop on the recent break up of AJ and Darcy.  Even after he finds out, he wants to make sure that no one gets close in case AJ and Darcy get back together again. Ultimately, the two act on the attraction they feel, only to regret their actions.  I will admit I wasn’t sure how I was going to feel about Reed getting together with his best friend's ex.  I mean it seems totally wrong.  But this storyline works for these characters and nothing comes across as scandalous.

Reed wants to have a serious relationship with Darcy but she wants a nice, responsible, good guy.  She knows Reed isn’t the permanent type, but she thinks he’s just who she needs to have an “adventure” with.  Reed has a past and oozes bad boy charm.  He sets out to show Darcy just what he’s capable of in the bedroom and out.  Reed is incredibly HOT.  He’s also a nice guy, who just doesn’t like to show his true colors.  When Reed pulls out the charm and actually starts to date Darcy, she’s forced to face her feelings for him, much to her dismay.  She ultimately realizes that Reed is everything she wants in a partner.

There is a mini storyline from One Night of Sin that is carried over into Scandal.  Unfortunately, that storyline didn’t play out the way I would have liked and seemed just a little too easy and maybe a little rushed.  But for me, it wasn’t that big of a deal.  Ultimately, One Night of Scandal gives you a couple who needs each other to complete themselves and show them what life is all about.  How good it can be if you just change your outlook a little.  One Night of Scandal is also sexy and hot.  Not really a whole lot more I can ask for.

I’m on pins and needles waiting for AJ’s story.

Purchase One Night of Scandal from Amazon or your favorite eRetailer

The After Hours Series: