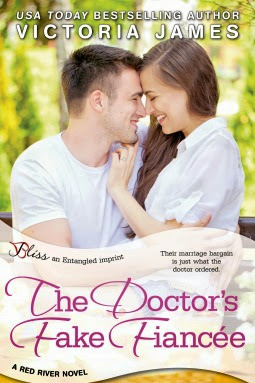 Their marriage bargain is just what the doctor ordered…


Former surgeon and self-professed life-long bachelor Evan Manning has one thing on his mind—to reclaim the career that a car accident stole from him. But when he’s forced to return to his hometown of Red River, Evan comes face-to-face with the gorgeous woman who’s haunted his dreams for the last year—the woman he rescued from the burning car that injured his hand. Now Evan needs her help. In a month, he'll have the job opportunity of a lifetime...he just needs a wife to get it.

Artist Grace Matheson is down on her luck again…until she walks into Evan Manning’s office. When her sexy former hero hears that she needs work, he offers her a job and a home—if she’ll pretend she's his fiancée. Grace knows she shouldn't fall for him. Once the month is up, Evan will be back to his old life. But the more time they spend together, the more real their feelings become—and the more likely heartbreak is.

REVIEW
Have you ever read a book and loved it so much you weren't sure where to start with explaining it?  That's how I am with The Doctor's Fake Fiancée.  The book had me laughing and crying and just wanting more.

Evan Manning and Grace Matheson are simply great. And oh my gosh, Grace's four-year-old son Christopher is a handful, but in a good way. Don't let it ever be said that kids aren't smart and don't pay attention.

A year ago, Evan lost everything that truly meant something to him, when he rescued a woman and little boy who were facing sudden death from a car accident.  By rescuing them, he suffered an injury to his hand that cost him his ability to be a surgeon. He also lost his girlfriend because without being able to operate, he was no longer the best.  In The Best Man's Baby, Evan found out things about his family that rocked him big time. His whole life he was pushed to be the best. He was always told that he had to be at the top.  Now, all he’s left with is a nagging voice that keeps reminding him that he MUST be the best.

"Things happen for a reason." A year after having Dr. Evan Manning save her and her son, Grace finally tracks him down. Sensing she is in need of money, Evan makes Grace an offer she can't refuse.  He hires her to work as the office manager of the family practice he is filling in for with the stipulation that she pretends to be his fiancée so he can land a job of a lifetime.

For Grace, Evan is not only offering her a job and a place to stay, but a lifeline. Grace has never had an easy life.  She believes in working hard and making sure that Christopher is first and foremost in her life.  They are all each other has and there isn’t anything she wouldn’t do for him.  Being in Red River gives Grace friends she’s never had and a community who cares for her and her son; something else that she’s never had.

While working together and pretending to a couple for a few events, Evan and Grace discover that there’s more than attraction between them.  But Evan is only able to offer up a short, one month relationship.  Grace is a forever kind of girl.  She can’t afford to let someone get close to Chris and then disappear out of his life.

Destiny and fate work together to bring these three people together to be the family they each desperately need.  There’s this saying that grace will lead you home.  For Evan, that is SO true.  Evan thinks small town living isn’t for him but with Grace and Christopher is in life, he’s happier than he’s ever been.

One of the best things about the book, and there are A LOT of good things about The Doctor's Fake Fiancée, is that the book brings back brothers Quinn and Jake, as well as their wives, Holly and Claire along with the kids.  This is simply a really really good book.  Oh my gosh, I feel like I’m cheating on Jake by loving Evan.

I don’t know what it is about Victoria James....I’ve read three books by her so far and I have cried some serious tears with them all.  Her stories are emotional, heartfelt, and touching.  She manages to write heroes that you want to be yours and heroines you want to be be friends with.  Be sure to have tissue because you are going to find yourself laughing and crying.  But it is SO worth it.

**Received a copy from the author in exchange for an honest unbiased review.  But also purchased the book myself.**