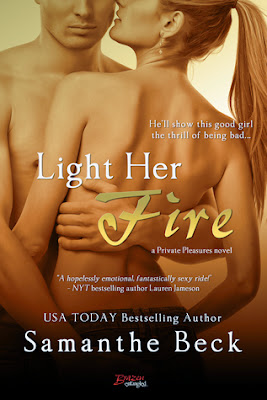 
He’ll show this good girl the thrill of being bad…

Good girl Melody Merritt is ready to be bad. Fresh out of an unsatisfying ten-year engagement to the town golden boy, she’s determined to make up for lost time. And who better to burn her sterling reputation to the ground than Bluelick’s sinfully sexy new fire chief whose wicked gaze promises complete and utter domination? Yes, please.

Corrupting the prim and proper Little Miss Bluelick is the most action Josh Bradley’s seen since he transferred from Cincinnati to fast-track his career. He won’t let anything or anyone—not even the delectable Melody Merritt—trap him in this Kentucky-fried Mayberry, but when their searing chemistry yields an unexpected result, he realizes he’s started a blaze that's completely beyond his control…

Melody Merritt, former Miss Bluelick is the epitome of a good girl.  She has spent the last ten years of her life waiting to marry her high school sweetheart, only to have her dream of the perfect future go up in flames.  Now, she needs to step out of the role she’s played for so long and end the pitying looks she’s getting from townsfolk.  And Fire Chief Bradley is just the man to help her do that.

“You ready to make your move, Chief, or are you just going to stare all night?”

Josh Bradley is new to Bluelick, Kentucky.  He plans on using his new position as Fire Chief of the Bluelick Fire Department as a stepping stone to become chief in a bigger city.  He has no plans on sticking around Bluelick and finds the town to be boring, to say the least.  But Melody has caught his eye and she has the ability to make his time in Bluelick a little more enjoyable.

Josh has some seriously nice moves and shall we say, a great mouth to go along with those moves.  “I’m always ready, Miss Merritt, but from what I’ve heard, you’re not into my moves.  I’m one of those big-city sinners that girls like you are taught to beware of.”  Read “holy smokes!!!!” into that statement.  When Melody gets a little guy help with how to drive a man wild, Josh doesn’t know what hits him.  But along with his personal life looking better and better, he has to deal with the possibility of an arsonist in town.

Melody and Josh face surprise after surprise with their newfound relationship and have to learn what the word compromise means.  But just when they’re working on finding their way to each other, tragedy strikes.  In a matter of seconds, they could lose their happy ever after.

Samanthe Beck delivers wonderful characters that you can’t help but fall in love with.  There's a little suspense that’s easy to figure out.  And a mystery character that’s going to have you dying to know more about.  Light Her Fire is a perfect addition to the Brazen line.