MISTAKEN BY FATE by Katee Robert 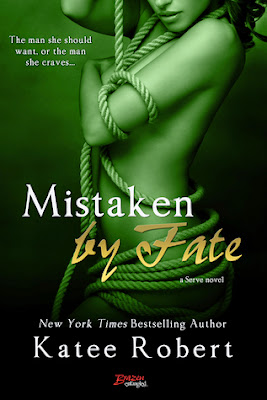 Former soldier Garrett Reaver hasn't ever gotten Ridley out of his system. And now that she's before him in all her submissive glory? He'll be damned before he lets someone else have her, especially his brother. Because Garrett and Ridley have some seriously unfinished business to take care of, and it starts now. And this time, he'll show Ridley how exquisite a relationship with him could be…if their past doesn't catch up to them first.

“From this point on, you will call me, ‘Sir.’ Do you understand?”

“It’s going to happen because you want it to as much as I do.  You got a taste of what it means to submit to me at Serve, and you’re already craving it again.”

He was, for me, a perfect Dom; in the bedroom he's a master, but isn't cold, detached or alpha with it and outside he's attentive and gentle, but with a wicked dirty streak.  Ridley is a natural submissive, and whilst she isn't afraid to voice her thoughts and concerns, she also trusts Garrett and this is what made the entire book work for me.  Together they bring new meaning to the words public, display and affection.

“I’m going to strip you down and tie your hands to my bed frame.  While you’re still testing the knots, I’m going to touch every inch of your body.”

With an introduction to Garrett's siblings - identical twin Will and their firecracker of a younger sister Sara - I have high hopes that this is going to be another winning series from Katee.  And, knowing that Will's book involves a ménage, I'm looking forward to seeing what that brings.

Copy received courtesy of Entangled Publishing for an honest and unbiased opinion.