Review ~ A RISK WORTH TAKING by Victoria James 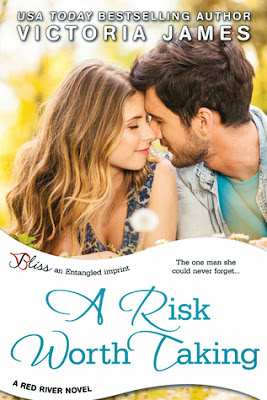 Interior designer Holly Carrington worked hard for her success. Then tragedy struck, leaving Holly the sole guardian of her infant niece. Now she’s swapped her designer purse for a diaper bag, and is going ahead with plans to renovate—and sell—her childhood home in Red River. But facing her past also means coming face-to-face with Quinn Manning all over again...


Quinn was the object of her girlhood crush—and heartbreak— and is more gorgeous than ever. He’s also the only person qualified to oversee the renovation. Now they’re butting heads every step of the way... and their attraction is more electrifying than ever! But once the house is sold, Holly needs to return to her real life. And falling for Quinn all over again is one risk she can’t take...
REVIEW
I don’t remember the last time I’ve read a book and had a heroine who was so broken, with the hero being the one pushing for the HEA.  I’m a HUGE fan of Victoria James and I managed to read the Red River series out of order.  I heard that Quinn Manning was a swoon worthy hero, but I will admit, I wasn’t buying the hype.  Man, oh man.  Or should I say Quinn, oh Quinn, oh Quinn. Quinn Manning is simply amazing and then some.

Holly Carrington is driven by success.  For years, she has worked her butt off at Martin Group to become a Senior Designer and she finally gets the position of her dreams.  But her life gets turned upside down and inside out, when her sister and brother-in-law die; leaving her the sole guardian of their infant daughter, Ella.

Holly returns to Red River to renovate her grandparents’ home, the one that her sister and brother-in-law planned to renovate and move into.  Only Holly doesn’t plan on staying around.  She wants to fix up the house, sell it, and get on with her life.  But Quinn Manning, the man who broke Holly’s heart years ago, has other plans.  Not only is Quinn going to repair the house, he’s going to repair Holly too.

Quinn is the oldest of the three Manning brothers and he take his responsibilities very seriously.  He doesn’t shy away or run from a challenge. There’s nothing more amazing than watching a man and a child together. Quinn and Ella take to each other like they were meant to be together.

I love this couple so much because they consistently butt heads, but they are so right for each other.  Quinn is like an anchor and a lighthouse, helping Holly find her way as a single mother and deal with the loss of her family.

A Risk Worth Taking is simply a must read.  It’s heartbreaking, but in the end leaves you smiling with this happy feeling inside.  In fact, I was smiling from page one.

Purchase A Risk Worth Taking from:
Amazon | Barnes & Noble | Goodreads