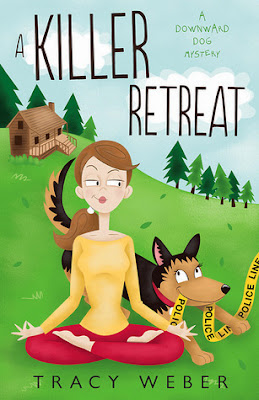 When Kate Davidson gets an offer to teach yoga classes to wedding guests at the Elysian Springs resort, she jumps at the opportunity, even though it means being forced to endure the wedding ceremony of the center’s two caretakers.

Avoiding the M-word turns out to be the least of Kate’s problems when a wedding guest is found floating face-down in the resort’s hot tub, shortly after a loud, public (and somewhat embarrassing) fight with Kate. The police pick Kate as their number-one suspect, so she’s forced to team up with boyfriend Michael, best friend Rene, and German shepherd sidekick Bella to find the real killer. But they’ll have to solve the murder before the police arrest Kate, or her next gig may last a lifetime–behind bars.

REVIEW
Kate Davidson is a contradiction.  She’s a yogi, which means she should be living a peaceful quiet life, without drama and anger.  But Kate has an issue with relationships, a chaotic life, and a really bad temper.  A Killer Retreat has Kate on a working vacation with her boyfriend Michael, her best friend Rene, Rene’s husband Sam, and of course Bella the rescued dog.

Kate’s mouth and temper land her in trouble when a person she publicly made a threat against is found dead in the manner she threatened to kill them in. With such a public proclamation, the sheriff has no choice but to suspect her of the murder.

While I enjoyed A Killer Retreat, I didn’t love it as I did its predecessor, Murder Strikes a Pose.  But that book touched my heart, so maybe a comparison shouldn’t be made.

Kate, her friends, and her attorney all know that she didn’t kill anyone.  They also know that the police think they have their person and don’t plan on looking anywhere else.  So, it’s up to Kate to clear her name.  But things aren’t really that simple.  While the death of the victim is tragic, especially since it takes place during a wedding week, the victim made enemies everywhere she went which leaves a long list of potential suspects.  Kate’s fear of relationships kicks in when she fears that after six months of dating, Michael is going to propose to her.  Adding to her stress, Rene is keeping something from her and Sam; something that’s going to change all their lives forever.

A Killer Retreat is told in first person, which gives you a great look into Kate’s crazy personality.  I’m looking forward to the next book in this series.  I really can’t wait to find out what kind of trouble Kate gets into next.

**Received a copy from the Midnight Ink in exchange for an honest unbiased review.**

Review of Murder Strikes a Pose

Tracy Weber is the author of the award-winning Downward Dog Mysteries series featuring yoga teacher Kate and her feisty German shepherd, Bella. Tracy loves sharing her passion for yoga and animals in any form possible. The second book in her series, A Killer Retreat,