Guest Post & Giveaway with Carolyn Brown, author of THE TROUBLE WITH TEXAS COWBOYS 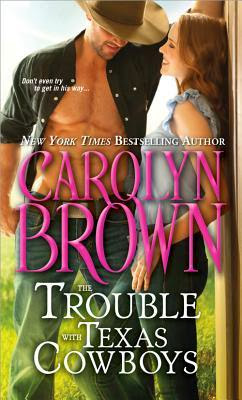 
When Sawyer O'Donnell takes a ranch job on a whim, he lands smack dab in the middle of a Texas-sized feud! The Gallaghers and the Brennans are at each other's throats to woo the red-headed spitfire, Jill Cleary, and stake a claim for the Fiddle Creek Ranch.

Jill makes Sawyer's blood boil. They argue, they banter, but Sawyer soon goes from being driven crazy to crazy in love. Damned if he knows how that happened. But now that it has, how does he compete with two men that can give this cowgirl a lifestyle beyond her wildest dreams?

In my opinion, Carolyn Brown is the Queen of Cowboy Romances. Yes, I actually said that.  Carolyn has written over 50 books, a majority of them involving cowboys.  Being a Texas/Oklahoma native who better to write about cowboys than her?  Her writing actually puts you into the books and allows you to hear the characters.  I recently had the opportunity to ask Carolyn why she thought cowboys make the best heroes.  This is what she had to say.

Imagine a sexy cowboy tipping his hat and saying that in a slow Texas drawl and you’ll completely get the reason I love writing cowboy romance. Having a cowboy like Sawyer O’Donnell take up residence in your head for a few weeks…well, let’s just say there are far worse things to endure. Take a look at the cover of The Trouble with Texas Cowboys and I’m sure you will agree with me wholeheartedly.
Cowboys do make the best heroes. What’s that? You want me to give you some reasons and examples why I said that? How long do I get to talk and how many reasons do you want? Three? Well, then give me a moment to pick the best three out of the dozen or so that’s already popped into my head.
Okay, I’m ready now.
Reason number one: They know how to treat a woman right. They open doors for her, listen when she talks about what she likes and would suffer the consequences of their mama if they ever treated a woman with anything less than respect. Sawyer knew from the second day that Jill did not like roses but that she loved daisies. He knew that she didn’t cook but that she did bake the most scrumptious desserts and he knew that she loved a foot massage at the end of a busy day.
Reason number two: Hard work is their middle name. They’re not afraid to get their hands dirty like Sawyer did while helping Jill with ranchin’ chores. But he never grumbled about working in the General Store and stocking shelves or grilling hamburgers at the Burnt Boot Bar in the evenings, either. Whatever needs done, a cowboy is up for the task.
Reason number three: They know how to have a good time and it doesn’t involve spending a lot of money. Sawyer might have to work behind the bar when things were hopping but after closing hours, he could plug money into the juke box and two-step around the bar with Jill after hours. Or he could take her into Gainesville to the antique stores on a Sunday afternoon and enjoy watching her pick out a metal ice tray to commemorate their first date.
Reasons four, five and six (just throwin’ these in for good measure): They are trustworthy. They fill out those jeans oh, so well. And they love their mamas.

Carolyn Brown is a New York Times bestselling author with more than sixty books published, and credits her eclectic family for her humor and writing ideas. Carolyn was born in Texas but grew up in southern Oklahoma where she and her husband, Charles, a retired English teacher, make their home. They have three grown children and enough grandchildren to keep them young.

Now it’s the readers’ turn…what reasons would pop into your head for cowboys being the most wonderful heroes?