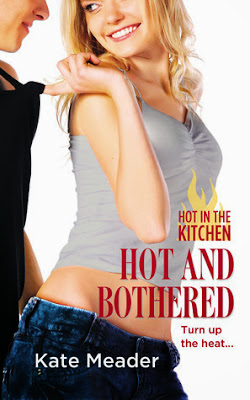 Hot and Bothered (Hot in the Kitchen, #3)

Although her baby boy keeps her plate full, Jules Kilroy is ready to take her love life off the back burner. Despite a bevy of eligible bachelors, it's her best friend, Taddeo DeLuca, who is fueling her hormones with a generous serving of his mouth-watering Italian sexiness. But Jules learned her lesson once before when she went in for a kiss, only to have Tad reject her. She's vowed never to blur the lines again . . .

After a lifetime of excuses and false starts, Tad has finally opened a wine bar, a deal made even sweeter when Jules joins his staff. Lovers come and go, and he's had his share, but friendships like theirs last forever. Still, ever since he tasted her luscious lips, he can't stop fantasizing about what could be. Then she joins an online dating site-and the thought of his Jules with another man makes Tad's blood boil. Even if he gets burned, Tad can't stop himself from turning up the heat this time.

Kate Meader is one of those authors who has the ability to mix humor and sexy together to produce unbelievable stories, which you just can’t get enough of.  Since I’ve yet to pick up a book and not laugh and not have to fan myself, I asked Kate to tell us her top five funniest moments from her Hot in the Kitchen Series.

Top 5 funniest moments from the Hot in the Kitchen series.
1.     The opening scene of FEEL THE HEAT, Book 1 of the Hot in the Kitchen series, pits a woman in a Wonder Woman costume against what she thinks is burglar in her family’s restaurant. Lili’s on her way home from a costume party, spots a light on in the kitchen, and pitches a skillet at the head of the would-be thief in the walk-in fridge. That would-be thief is our hero, celebrity chef Jack Kilroy.

2.     A video of a steamy kiss between Lili and Jack in FEEL THE HEAT has gone viral and the trolls are out in force! This includes Lili finding out that her butt now has its own Twitter account. (Smiles)

3.     In Book 2, ALL FIRED UP, we have a drunken marriage in Vegas and two tortured souls trying to navigate the aftermath. Irish pastry chef Shane has persuaded uptight events planner Cara to come out on a date—line dancing. And the poor girl has no rhythm whatsoever…

4.     In the final book of the series, HOT AND BOTHERED, Tad and Jules are best friends who both want a lot more. Some of the funniest moments in the series happen in this installment. Tad sabotages one of Jules’s dates—and is happy to use her kid, Evan as heavy artillery.

5.     In HOT AND BOTHERED, a half-naked Tad waltzes into Jules’s kitchen the morning after they finally do the deed, only to find his nosy aunt Sylvia sipping coffee at the kitchen table with eyes on stalks. Buon giorno, de-rection!

“Come on, don’t be shy. You have an amazing figure and—oh, perfect. Hold that.” Click.

Tad’s heart thudded insanely fast. He crept a few inches forward until he had cleared the pillar with his gaze. Lili had her back to him, shielding her subject, but he got a very healthy view of shapely legs inadequately covered by something red and soft-looking.

“You know, if you ever felt comfortable enough to go bare, I’d love to photograph you.”

His cousin laughed. “We could insist he put it up in the dining room at Sarriette. He’d be so torn between wanting to encourage my art and being totally skeeved out.”

My wild days are behind me,” Jules said on the downside of a laugh. “You wouldn’t believe some of the shenanigans I got up to back in London.” He heard her breathy sigh of reminiscence and strained to hear what salacious details might follow. This London version of Jules sounded like a woman he’d like to know.

“Well, there was one time I jumped in a fountain and stripped down to my—”

“Hey, cuz,” Lili said to him, a sly smile quirking one corner of her mouth. “How long have you been there?”

He patted the pillar he had just been leaning against/hiding behind like they were great pals. “Just got here.”

“Do I need an excuse to come see my favorite cousin?” It came out a touch testy.

“Not at all. I just thought you’d be busy stroking your Cabs and Pinots.”

“Only do that on Tuesdays and Thursdays. Should I leave?”

“No, we’re just finishing up.” Lili sat at her iMac and hooked up the camera with a cable.

“All right?” Jules asked, almost shyly, as though they barely knew each other and in a way it felt like he was looking at her anew. The dress she wore was one he hadn’t seen before, a cherry-red, draped affair. One of those wrap-around deals that separated her breasts and flared over her waist. Not especially sexy but…

In that dress, she looked like she should be running the PTA, then going down on her husband in the Subaru in the school parking lot. Thankfully, that was years off because Evan was just an ankle biter… unless she hooked up with some lonely widower who already had school-age kids. Damn, that was a real possibility. He bet those websites were crawling with lonely widower fathers.

He was having problems catching his breath, a hitch that extended to his cock, which suddenly needed breathing room. To be perfectly honest, if Lili wasn’t there, he would be seriously considering unwrapping that dress and exploring the finely curved gift underneath. Jules stared back, probably wondering why he was ogling her like a just-released convict who hadn’t seen a woman during his fifteen and a third in the clink.

“Hey,” he said, finally responding to her greeting of about ten minutes back. He diverted his eyes away from her breasts to a good twelve inches north. Women 101. They preferred when you looked at their faces.

“Uh huh. For my profile.” She blushed, and that’s when he noticed that she was wearing a lot of eye make-up. The smoky, sexy eyes that you saw on magazine models. She had done something different with her hair, too. It was tousled, fuck-me hair.

“My glamour shot, as Lili calls it,” she said with an eye roll. Can you believe what they’re trying to make me do?

His body clenched and he willed it to relax. Her glamour shot. She may as well have painted a sign: Come All Takers, Get Your Hot Mama Here. Lord knew he was trying to stop staring at her but he couldn’t tear his eyes away from all those damn curves.

“Is something wrong?” she asked.

“I’ll just get changed,” she muttered, swaying away to the cover of an ornamental screen in the corner.

He blinked to get his brain in the groove and made inane chitchat with Lili about the plans for Tony and Frankie’s wedding anniversary party. If his parents had still been here it would have also been their anniversary. The couples had married in a double wedding extravaganza thirty-five years ago. He shoved that to the back of his mind with the rest of the shit he had succeeded in burying.

He was an absolute expert at it by now.

Jules walked out from behind the screen, pulling up the zip of her sweatshirt, but not so fast that he missed the sweet swell of her breasts in something thin and stretchy. Come on!

“Could I see how it came out?” she asked Lili as she set a suit bag over a chair.

“Sure.” His cousin clickity-clicked her screen.

Tad stole another glance at Jules. He couldn’t not look at her. A pearly pink glow had washed her cheeks and she looked so damn fine, he wanted to lick every inch of her. He turned back to the screen and what he saw wasn’t much better.

Well, she always looked gorgeous, whether she was in baggy sweats or a frayed tee that had seen better days. Even when she looked like she was falling asleep on her feet, she never failed to look amazing to him.

Now she looked amazing to the world.

The Hot in the Kitchen Series:

Feel the Heat ~ Review
All Fired Up ~ Review 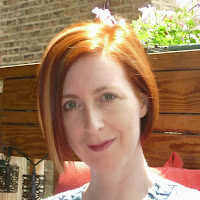 Kate Meader writes contemporary romance that serves up delicious food, sexy heroes, and heroines with a dash of sass. Originally from Ireland, she now makes her home in Chicago, a city made for food, romance, and laughter - and where she met her own sexy hero. When not writing about men who cook and the women who drool over them, she works in an academic library. Visit her website at http://katemeader.com and follow her on Twitter @kittymeader