Review ~ ONE NIGHT OF TROUBLE by Elle Kennedy 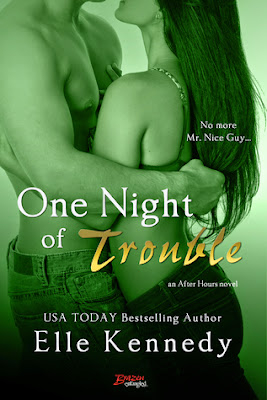 
The moment AJ Walsh sees the sexy, tattooed pixie walk up to his bar, it's lust at first sight. He's always been labeled the "nice" guy―opening doors, buying flowers, and never, ever having one-night stands. But with this wicked little angel with red lips and unfathomably dark eyes? Oh, yeah. Tonight, "nice" has nothing to do with it...

Brett Conlon is trying to convince her family that she's put away her reckless wild girl side for good. Nothing―and no one―could be better for her reputation than golden boy AJ Walsh. So they make a deal: if he plays The Good Boyfriend for her family, he can be a very, very bad boy with her. Now their one naughty night is about to turn into a whole lot of trouble...

REVIEW
They say the quiet ones are the worst and A.J Walsh has been fairly quiet in our previous outings in Elle Kennedy's After Hours series.  Taking a leaf out of Gage's book, he wastes no time when his head is turned in his club by small but feisty Brett Conlon and the time has come for him to throw caution to the wind and enter the realm of the one night stand...

One Night of Trouble sees the tables being turned a little; we have a clean cut, good boy and a tattooed bad girl and if ever there were a case of opposites attracting/looks being deceiving A.J and Brett are it.  With an amazing chemistry leading to some sizzling shenanigans, a little fib turns one night into three weeks with a faux-mance thrown in for good measure (with the best of intentions of course).

"How on earth am I going to make it better?"
"Your mouth on my dick would be a good start."
"And what do I get in return?"
"My dick in your mouth."

You can't beat a dirty talker and a lady who has some fight in her and our couple bring just that.  And with humour and emotion throughout I devoured it.  This series has been hot, sexy, fun, and touching.  Each couple have been unique and Elle Kennedy has finished off the series nicely.  Although, Brett does have three brothers....

Purchase One Night of Trouble from:
Amazon | Barnes & Noble | Goodreads