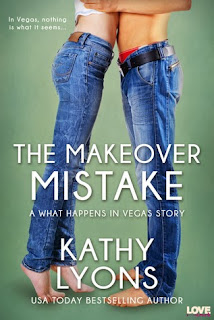 
In Vegas, nothing is what it seems...

After losing a bet, successful publisher Michael Chang is "pretending" to play the piano in a Vegas lounge in order to spy on his less-than-trustworthy employee. His espionage is quickly derailed after meeting Thea Danelle, an editor who's been wronged by Michael's company. She's smart and unpredictable…and clearly hiding a naughty side that tempts Michael to distraction.

Thea has gone from frumpy librarian to the young, wild thing she used to be—all thanks to the promise of sensuous delight in the piano player's eyes. And frankly, after losing yet another author to the competition, Thea is ready to forget her professional problems and explore those sexy promises thoroughly. With Michael, she can finally be herself...until the moment Thea learns who he really is.

REVIEW
The Makeover Mistake by Kathy Lyons brings you likeable leading characters in Michael and Thea and a fabulous secondary character in Jonathan, Michael’s older brother.  When humor gets involved in this story, it just makes the book all the better.  I loved that Kathy gave her readers a nice little treat by including a deleted scene at the end of the book.  However, I wish some of the deleted scene would have made it into the actual book.

I did have some issues with this story.  Pretty much throughout the entire book, Michael is lying to Thea.  Usually in a quick hook-up situation, the parties don’t actually know who each other truly are and just know vaguely what the other party does.  Here, Michael knew exactly who Thea was and what she did.  And while I know it wasn’t his intention, the fact that Michael treated Thea like a high class call girl or a kept woman really wasn’t the coolest of moves.

With all of that said, I found The Makeover Mistake to be an enjoyable read.  I would really like to see Jonathan get his own story.