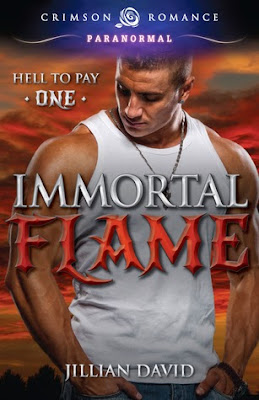 World War II veteran Peter Blackstone traded his soul so that his wife could live. That was 1945. Since then, Peter has lived an unnaturally long life as a hired killer, providing the life forces upon which Jerahmeel feeds to survive.

Doctor Allison La Croix has a big problem. She randomly sees people’s deaths. She has longed to be free of her twisted “gift” to live a normal life without fear of predicting yet another loved one’s demise.

After a horrific accident, a severely injured Peter arrives in Allison’s ER. The vision Allison experiences when she touches him nearly kills her. He teaches her to block these devastating episodes as she finds a way to unlock his forgotten, passionate soul.

But Jerahmeel’s minion has orders to destroy Peter and anyone he loves. Will Peter’s and Allison’s shattered souls survive the devious plan? Or could their love save them both? Someone will have hell to pay.

Hi, Jillian.  Thank you for joining me today.

Thanks for having me on Read Your Writes.

Can you please tell me about your Hell to Pay Series?

Hell to Pay was created out of a series of “what if” questions that rolled around in my mind.

Once I started answering those questions, the series kind of exploded from my head onto the page!

The first book in the series, Immortal Flame has a hero from World War II.  Why did you choose to have your hero in essence be nearly 100 years old?

I wanted the burden of time weighing on the character. Peter exists in a world where everyone he knew when he was a human, has now died. But I wanted him semi-modern, not old-old, so he could blend and function well in the modern world.

Also, just prior to writing Immortal Flame, I was reading Truman by David McCullough (yes, that 1000+ page biography). You guys, that book was fascinating! And it got me thinking about what kind of men were drafted into World War II and what they left behind. That’s how Peter Blackstone came into existence.

Describe Peter Blackstone for me and make me fall madly in love with him.

Peter sacrificed his soul in a last-ditch effort to save his wife in 1946. He didn’t care about the consequences, which, as it turned out were beyond horrific. He only wanted her to live. Peter carries nearly 100 years of sadness and anger with him, but never lashes out at Allison the book’s heroine. In fact, he channels all of that resentment into a powerful weapon and uses it to protect her.

Also, he’s tall, sexy, smart, and brooding. Come on, what more do you want?

Your heroine from Immortal Flame, Allison La Croix, has a "gift", she sees people's deaths.  Is this like a sixth sense for her?  Has she always been able to do this?

She suddenly came upon this “gift” when she was a child. She touched her father and BOOM, sensed his impending death. Ever since then, she’s hated her power.

But a deep sense of guilt over predicting her father’s death those years ago led her to a calling as an ER doctor. At least there, she can use her medical skills to save some of her patients. Small satisfaction for the guilt she carries with her. Small consolation for the fact that she cannot get close to anyone, for fear of predicting another loved one’s death.

What can readers expect when they pick up one of your Hell to Pay books?

Readers can expect a rollercoaster. Crazy emotions, twists and turns right off the bat, and finding out about a shadow world that could exist right here, right now, that we would never know about it.

I’m told that these are very dark books, exploring evil on several levels. The Hell to Pay series isn’t for the faint of heart. If you like fluffy rom-com or sweet romances, this book will jar you out of your shoes. Be prepared to be heartbroken, hopeful, disgusted, giddy, terrified and aroused. (That might just be the first 2 chapters, actually….)

In speaking with you through several emails, you have a really cool sense of humor.  Does some of your humor find its way into your writing?

You know what? I think just about everything is funny. Life. Crazy health issues. Work. It’s all fair game. I look for the funny in everything.
Except for when I’m writing. It’s always been like that, even in high school and college. My writing has been this outlet for the “dark side” of my personality that stays firmly locked in the closet. Seriously, if my patients knew about the dark stuff I wrote, they’d be horrified. (My mom, too.)


So, is there humor in the writing? Yes, but in limited amounts. I flip back and forth between levity and seriousness because, well, that’s life. We don’t experience one continuous happy or sad emotion, even in a crisis. It’s often a mixture of feelings.

Tell me about your writing style.  How do you write your books?  Do you start with just a scene and go from there, or do you write in sections (beginning/middle/end)?

Well, we should start by acknowledging that I had no idea what I was doing with this writing romance thing, in the beginning. This series was the ultimate on-the-job-training and I had fabulous instructors along the way.

The first book, Immortal Flame, I planned to be a stand-alone novel. But as it developed, Dante’s (Peter’s friend) larger-than-life personality demanded its own book. Then I started thinking about elements that tied all three books together, and how there was a connection, even between the mortal and non-mortal characters.

The series then expanded rapidly (like the big bang theory) between book #1 and #2. Book #3 (Flame Unleashed) is a really cool conclusion to the series that brings everything together in a way that makes sense, but has some bizarre twists and turns and super scary moments in it as well!

What's your favorite part of a romance novel to write? (The beginning, the first meeting, first kiss, getting to know each other, first love scene, big fight, HEA or something else?)

The action is my favorite part (not the sex-action, the action-action). I’m not sure what would happen if I tried to write a sweet romance. The hapless, quirky hero and cute, klutzy heroine would end up base-jumping off a cliff to escape a swarm of attacking zombies.

Action. I love scary suspenseful action. But without the love story, it doesn’t make sense. Needs to have romance in there, too, to really raise the stakes, because risking love is the biggest stake of all.

You have another job, outside of writing.  Where and when do you find time to write?

My mild-mannered alter ego, Dr. Jill, works in a very rural area of the country, doing crazy things like delivering babies, treating folks in the ICU, performing some surgeries and colonoscopies (ewww), sorting out nutty patients, and occasionally even shooting folks full of things like Botox and other noxious substances. Crazy days.

I write when the day is done (whenever that occurs, like right now it’s 9:30 p.m. on a Wednesday). And I write when I’m on call. If I have to be stuck in town within 20 minutes of the hospital every 3rd day of my life, I might as well be productive. Not every call day has screaming, dilating, cursing pregnant women. Those quiet days are the days I write.

Currently, Immortal Flame is out.  Book two, Relentless Flame is scheduled to come out in May, the third book, Flame Unleashed, will be out in September.  How are all the books connected?

Kim, if I told you how they’re connected, that would spoil a huge part of the series arc!

I knew you weren’t going to tell me!

How about this: they all feature sexy, hot guys and strong, awesome women as main characters. And they all have problems with looming evil and getting in the way of their happiness.

Thanks for taking the time to answer some questions for me!

Hey, thanks for having me, Kim! I appreciate you supporting a debut writer. And I also really appreciate all of the readers who make writing these books so worthwhile.

Jillian David lives near the end of the Earth with her nut of a husband and two bossy cats. To escape the sometimes-stressful world of the rural physician, she writes while on call and in her free time. She enjoys taking realistic settings and adding a twist of “what if.” Running or hiking on local trails often promotes plot development.

She would love for readers to connect with her on Twitter or her blog.   Readers are always welcome to email her as well.