ONE FOOT IN THE GRAPE by Carlene O'Neil ~ Review 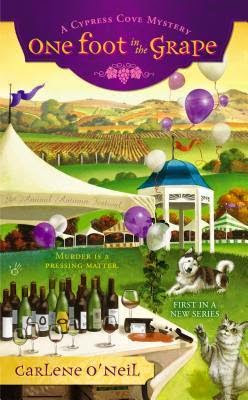 In California wine country, the town of Cypress Cove may seem peaceful. But someone’s about to pop their cork…


After losing her job as a photojournalist, Penny Lively is trying to get her life back in focus. Inheriting the family winery from her late aunt may be the fresh start she needs. Thankfully she’s got her niece Hayley and her handsome winery manager Connor to help. But the person in need of more urgent assistance is Antonia Martinelli, the owner of the neighboring winery, who has her own barrel full of problems. Someone’s spoiling her wine, and with the upcoming Autumn Festival, she needs Penny’s nose for clues to sniff out the culprit.

But Penny’s search for answers sours after the body of a staff member is found in a grape crusher. Since Hayley was the last to see him alive, she’s the prime suspect in the case. Now Penny must hurry to find the real killer before Hayley withers on the vine…

REVIEW
Penelope (Penny) Lively has returned to Cypress Cove, California after losing her job, to take over her Aunt Monique’s winery, after the woman’s death.  Six months in, things are going well, until Antonia Martinelli, a distant relative, Monique’s cousin and owner of the neighboring winery asks her for help in figuring out who is sabotaging her wine.  The Autumn Festival and harvest time are near and if Antonia can’t figure out who’s behind the sabotage, Martinelli Winery could be no more.

Penny is very witty and thinks fast on her feet.  She has a curious nature about her, but she isn't someone who likes to take risks.  Generally, she pretty much does things without thinking about the consequences, which of course usually lead to bad things happening.  Penny ultimately stumbles upon the body of a well-liked winery employee and feels the need to investigate his murder since her niece was the last person to be seen with the employee.

Penny doesn't necessarily go looking for trouble, it just sort of finds her.  In looking into and questioning events and people, Penny unknowingly puts her life in danger.  The killer is closer than she thinks, but who they are and why they're on a killing spree is a mystery.  One Penny has to solve, before it's too late.

The climax is surprising, leading to an unexpected twist with an ending I didn’t see coming.  Even now, I’m playing back the events wondering exactly how Penny truly figured all of the pieces out.

One Foot in the Grape had me at page one.  The book is full of murder, adultery, sabotage and of course, wine. Turning cozy mystery books into  movies are a big thing now.  I can totally see this book making a wonderful movie.  The characters are perfect; from Penny, to her niece Hayley, Winery Manager Connor, Chief Lucas and Antonia.  Add in the possibility of romance and I'm really a happy girl.

I have found a new author and series to love.  Told in first person, One Foot in the Grape is the first book in the Cypress Cove Mystery Series from debut author Carlene O’Neil.  This is definitely a must read book.

Purchase One Foot in the Grape from:
Amazon | Barnes & Noble | Kobo | BAM | Add to Goodreads