Mickey J. Corrigan's THE BLOW OFF 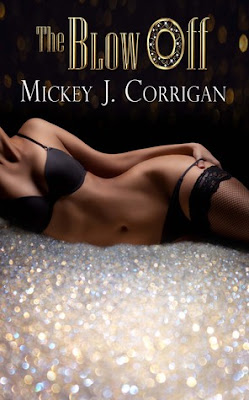 
When her boyfriend deserts her and the debt mounts up, Shea O'Grady forms a seduce and rob gang to take the men of Boston for all they've got.

One long, hard night of working the streets is more than enough for this overeducated underemployed 25 year old. She just doesn't have the stomach for it. Or the lips. So she comes up with a better way to use her youthful sexiness to pay off her debts.

When she shares her plan to seduce and rob johns with Cedrick7Z, her nasty tempered pimp, he agrees to fence her take for a generous cut. So Shea puts together a team of girls to work with her. And she convinces her downstairs neighbor, a hunky Rastafarian dealer dude, to help with the knockout drugs.

Based loosely on the exploits of a sexy set of bottle girls operating in South Florida, The Blow Off is a cautionary tale, a romantic black comedy, and a satirical look at student debt, prostitution, woman on man crime, and the things we do for love.

REVIEW
Shea O’Grady resorts to the world’s oldest profession to make ends meet and get herself out of debt.  Oddly enough, after just one night on the job, she decides that she is just not cut out to be a hooker.  She is however, cut out to drug unsuspecting johns and rob them.  Shea makes a deal with her pimp and initiates the help of her pot peddling neighbor to get a crew of females together who are willing to flirt for cash. Her plan seems far too easy and she gathers a beautiful but indecisive crew together in a very short amount of time.  Nothing could go wrong, right?

There is nothing about this book that could possibly be real but that’s what makes it so darn fun.  Shea whose hooker name is Heaven Scent is hilarious.  The story is told from her first-person perspective so we get to know what’s going on in her insane little head.  She’s young and fearless but she is actually smart.  You can’t help but appreciate her attempts at financial freedom.  Not that hooking should have been the first choice on the menu.  As the women venture out on their first couple of heists, I learned quickly that their careers would be short-lived.  You will have to read for yourself to find out if they had any luck.  I was thoroughly entertained and look forward to another installment.

**Copy received courtesy of the author in exchange for an honest and unbiased opinion.**

Purchase The Blow Off from:
Amazon | Barnes & Noble | Goodreads