Review ~ BLAME IT ON THE KISS by Robin Bielman 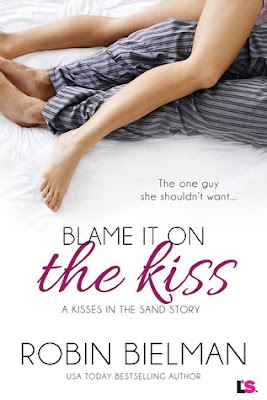 The one guy she shouldn't want...


Honor Mitchell has lived with guilt and regret for a long time, so when she promises to do the things on her dying best friend's wish list, she's determined to follow through and do something right for a change. But when she's thrown together for wedding duties with the one man who complicates her vow--just by looking at him--she has to put her faith in Bryce Bishop's pledge to help her, no strings attached.

Bryce's near one-night stand with his ex-girlfriend's best friend a few months ago might have been a mistake, but helping the beautiful, free-spirited Honor with her promise isn't. His trust in women is shot, but he can't help but play his best man card to his advantage and help Honor tick off the items on his ex's list, even if it puts him in a no-win situation. Because his assistance might get Honor what she wants, but suddenly being the do-good guy puts his plans--and heart--in serious jeopardy.

REVIEW
First off, I have to say Blame it on the Kiss is my favorite Robin Bielman book to date. I even have to admit that Honor and Bryce are also my favorite couple. That’s saying a lot since I generally love all of her couples.

Bryce Bishop is truly a good guy.  He oozes the “forever” vibe.  A family and a white picket fence is him.  He thought he was on track to have all that and more until Payton dumped him via voicemail.  Now, he doesn’t trust his heart or women.

Honor Mitchell is a free-spirit with a heart of gold.  Unfortunately, she’s been living with regret for way too long.  It’s this regret that she’s been using as a crutch and holding herself back.  She’s so accustomed to failing or thinking that she’s going to fail, that she doesn’t even try.  But when her best friend since kindergarten passes away, she’s determined to fulfill the promise Payton asked her to.

Payton’s list of “Things to Do Before I Turn 25” consists of:  1) Have a one night stand 2) Get a tattoo 3) Take a hot air balloon ride 4) Open an antique store with my best friend 5) Fall in love.

Honor is actually in the process of working on checking one night stand off her list when she meets a guy named Bryce.  Before things go too far, the two realize who the other is and backs off.  But there’s no denying there are sparks between them. Turns out, Bryce was Payton’s boyfriend, before she died.

Things for Honor and Bryce get complicated when they try to avoid each other. Unfortunately, or maybe fortunately for them, that’s impossible when they have to spend the weekend together at their best friends’ wedding.

One kiss will just never be enough for these two.  At the time when Payton broke up with him, he never knew why she did it.  Honor keeps thinking of Bryce as belonging to Payon and feels bad about thinking about “Payton’s” guy that way. Blame it on the Kiss is special in that it’s an unbelievable story of friendship. Robin takes the readers along Honor and Bryce’s journey of recovering from the loss of someone they both cared about.  You get to see Honor struggle to keep a promise, learn to trust and have faith in herself, and forgive herself for things she thinks she’s done wrong.  You see Bryce falling head over heels in love with Honor and willing to do anything to see her spread her wings and discover who he and everyone knows her to be.  I can’t forget about the chemistry.  They totally have chemistry.

“I may be clean cut on the outside, but make no mistake.  I like to get very, very dirty when nobody’s looking.”

What?  Wow.  What happened to mister nice guy?  Trust me, he is still definitely there. Bryce manages to make eating waffle fries sexy.  There are a couple of secondary characters I would love to read about, so I am definitely looking forward to returning to White Strand Cove.

Purchase Blame it on the Kiss from:
Amazon | Barnes & Noble | Goodreads


The Kisses in the Series:
(Click on the book covers for more information or to purchase from Amazon.)