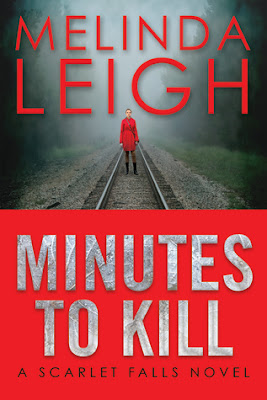 
After corporate attorney Hannah Barrett tries—and fails—to stop a kidnapping in Vegas, she can’t shake the haunting image of the terrified young girl she couldn’t save. She tells herself that a visit to her hometown in Scarlet Falls could be a welcome distraction. But soon, Hannah realizes the kidnappers have all the info they need to track her every move. And when chilling e-mails about the victim appear in her inbox, it’s frighteningly clear what happened in Vegas has followed her home.

Eight months after a terrible family tragedy, Hannah turns to Detective Brody McNamara once again. Brody is eager to help, though he’s embroiled in the investigation of a brutal murder. But the closer they work together, the stronger their feelings grow…and the more they stand to lose when two seemingly unrelated, but equally deadly, cases collide.

REVIEW
Minutes to Kill is the second book in the Scarlet Falls series.  It could be read as a stand alone but you would get much more out of it if you read the first book, Hour of Need, since there are plenty of references to prior events.  Minutes to Kill focuses on the only female sibling of the Barrett family, Hannah; while the first book focused on the oldest male sibling, Grant.  Hannah inadvertently gets dragged into the seedy world of human trafficking and prostitution when she bumps into a young girl trying to evade her captors in a parking lot in Las Vegas.  Hannah was just leaving a party at one of her rich client’s hotels when the girl knocks her down and tells her that the man that is chasing her is going to kill her.  As Barretts always do, Hannah tries to help but fails and finds herself a target because now she is a witness and loose end.  She continues on to her vacation destination at her brother Grant’s house in Scarlet Falls but trouble soon follows.

As with the first book, we learn a lot more about the rigid military-centric way the Barrett children were raised.  We also get more insight into how that upbringing affected each one of the kids.  Since Hannah was the only girl, she had plenty of daddy issues because her dad never wanted to include her in any of the military drills that he conducted for the boys.  Of course, she forced her way into them anyway.  Hannah Barrett is the toughest non-military woman that I have ever read.  She may be a corporate attorney but she is fearless and can hold her own against any man.  That may make her somewhat intimidating but I just see her as being a person that commands respect and admiration.  She has a heart of gold and is still learning exactly what family really means.  Consequently, the impending danger gives her pause to reflect upon the lack of love and companionship in her life.  It doesn’t hurt that she ends up spending time with a handsome detective named Brody McNamara.

There is a lot going on in this book but it never gets too complicated.  The cat and mouse game between Hannah and her potential killer is intriguing.  He has no idea what Hannah is capable of and gets a rude awakening that makes you question who’s the mouse in this game.  To make things worse, there is more than one assailant and they are equally dangerous and sadistic.  Plenty of women get murdered as they hunt for Hannah.  Plus, there is an interesting connection that you just won’t see coming.  I was very impressed with this book and look forward to reading the third book in the series.

The Scarlet Falls Series:
(Click on the book covers for more information or to purchase from Amazon.)

Gemini’s review of Hour of Need