Review ~ BACK TO US by Christi Barth 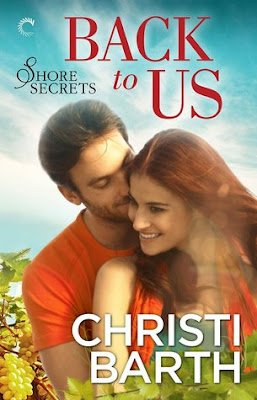 
Ward Cantrell always went for the long shot. But that recklessness cost him his college scholarship and his chance to play pro ball, and—worst of all—it ended his relationship with the girl next door. Neither the town nor the girl has ever forgiven him. Now he's taking one last long shot by opening a boutique distillery on the family farm he inherited.
Piper Morrissey spent high school in Ward's shadow, but she's come into her own in the years since. Maintaining her spotless image, and that of her family's winery, is priority number one. Nobody knows that she still yearns for her golden-boy ex. Or at least they didn't—until Ward agrees to sell Piper the land she needs to start her precious port line. The caveat? She'll need to date him for one month.
Ward hopes a month is all it'll take to convince his former sweetheart that while he's changed, his love for her hasn't. But when the chance arises to thumb his nose at the town that turned its back on him, he can't afford not to reject Piper's offer. Will that make her reject him and his love—for good?
REVIEW
Back to Us is the second chance love story of Piper Morrissey and Ward Cantrell.  The two are part of a group of four best friends from junior high.  During high school, the two became a couple and their relationship continued on to college.  Unfortunately, due to distance and loneliness their relationship didn’t work out.  In the previous books, you see the tension Piper and Ward have when they’re around each other, but it isn’t until their story when readers find out why they broke up and the town of Seneca Lake dislikes Ward.

Ward wants to expand his distillery business but is denied the loan based on his past. Wanting to fulfill a deathbed promise, Piper is met with roadblock after roadblock. Realizing that they can both help each other, Ward offers to sell land to Piper.  Not only will Piper pay him money for the land, but Ward wants him and Piper to date for a month.  He wants to prove her that they can be as good, if not better than they were before.  Having never stopped loving Ward, Piper agrees.

Piper and Ward’s relationship is one that has to overcome their past issues with each other and themselves.  There are a group of people in Seneca Lake who refuse to allow the past to stay in the past and like to remind Piper and Ward about it whenever they get the chance.  Trust and honesty are the cornerstones of any relationship and these two have shown that they both have problems with those things.

I like Ward because he always tries to do the right thing.  But sometimes he over thinks and just makes things worse.  With having three women as best friends for over fifteen years, you would have thought that he would have learned how they think and what they want.  Piper tends to spend too much of her time focusing on appearances and what people will think as opposed to truly living her life for herself and not for her parents or the people in town.

One of the reasons I was looking forward to reading Back to Us was for the secondary romance between another couple.  The two liked each other from afar for about three years but never said anything until the second book, All for You.  I was disappointed with the way their storyline played out.  I know Back to Us is roughly 95,000 words, encompassing 243 pages, but I think this couple and the readers deserved more from their story.

I would like to say Back to Us is a standalone read.  However, I read a review where the person didn't read the first two books in the series.  That person felt the book was a standalone, but still felt they were missing something.  Having read the previous book and part of the first, I can see why someone would think they were missing something.  I think you would definitely get more enjoyment out of Back to Us if you've read the previous books.  You miss the true extent of the friendship between the main characters and secondary characters.

As with all of her books, Christi Barth continues to show that true family is those people you want and allow to be a part of your life.  All the characters have an extremely close relationship with each other which is one of the things I love about her books.

**Received a free ARC in exchange for an honest unbiased opinion.**

Purchase Back to Us from:
Amazon | Barnes & Noble | iTunes | Kobo | Google Play | Goodreads

Shore Secrets Series:
(Click on the book cover for more information or to purchase from Amazon.)

All for You ~ Review

Christi Barth earned a Masters degree in vocal performance and embarked upon a career on the stage.

A love of romance then drew her to wedding planning.  Ultimately she succumbed to her lifelong love of books and now writes contemporary romance.

Christi is President of the Maryland Romance Writers and lives in Maryland with her husband.