Review ~ EVEN THE SCORE by Kate Meader 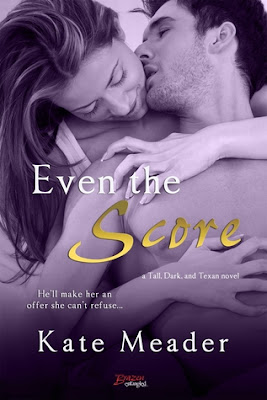 
He'll make her an offer she can't refuse...

Actress Tess McKenzie is performing in the Tenth Circle of Showbiz Hell-dinner theater.  All she really wants is to start a theater of her own.  Then Tess receives an offer she can't refuse.  She'll get her funding...if she pretends to be the fiancée to her nemesis, Texan property tycoon Hunter Dade.  If she's going to pull this off, she'll need all the luck she can get.Break a leg, indeed.

On the verge of a big business deal, Hunter needs to hire a fiancée.  He hasn't quite forgiven Tess for ruining his wedding, but when their chemistry goes from combative to straight-up lust, the "no sex" clause in their mutually beneficial arrangement is tested.  Which is a serious problem, because if Tess isn't careful, she'll go from breaking a leg to breaking her heart...

REVIEW
Confession time...I’ve known Even the Score was coming out for awhile now.  Being a fan of Kate Meader, I couldn’t wait.  I’ve heard bits and pieces about the story.  From those bits and pieces, I was concerned I wasn’t going to like the heroine, Tess McKenzie. I mean come on, the woman convinced her friend to not marry the hero, Hunter Dade on their wedding day.  The man was actually left at the altar in front of hundreds of people.  That’s a little hard to get over.

Kate Meader brings her classic humor which I love her for to Even the Score.  She also brings the heat which I think is more than she usually writes.  I went into reading this story with a preconceived idea of what the characters were like.  I was totally wrong and I’m so happy for that.

Tess McKenzie is an underpaid stage actress (read broke), chasing her dream of opening her own theater company.  She refuses to take the easy way out and ask her mega-star mother to help her.  She’s brass, sassy, and has her own dirty mouth.  I totally love her!!! But for her, she’s been playing a part her whole life and she isn’t too sure who she really is.

Hunter Dade is an alpha through and through.  He’s a sweet and dirty talker with a protective streak that’s a mile long.  For all the good in him, Hunter is running from his past and has regret eating him up.  I can't remember the last time a character had my heart breaking for them.

Hunter needs to purchase a piece of property in Texas, but in order to do so, he has to show he’s in a committed relationship.  At the offhanded suggestion by one of his business partners, Hunter offers Tess the money she needs for her company if she plays the part of his fiancee for a weekend.  With explosive tension and serious chemistry between them, these two are like longhorns circling each other and preparing for battle.

Hunter has a violent and tragic past which rules his life.  Tess’ past isn’t all smiley faces and hearts like people think.  Together they bring out the best in each other, resulting in fake feelings becoming a little too real.  Tess and Hunter show that when you set out for payback and to even the score, you get more than you bargained for.