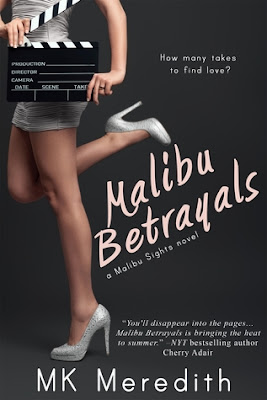 
Can a Hollywood Hunk find real love? Find out in the latest from Select Contemporary...

Her chance to write a whole new ending...

Hollywood screenwriter Samantha Dekker spent the last year picking up the pieces after her husband's suicide. Along with grief, guilt, and tabloid hell, she's had to watch helplessly as the film industry slammed its doors in her face. Now Sam has the rarest of Hollywood opportunities - a second chance...working with the one man she swore never to see again.

Hunktastic A-lister Gage Cutler knows that Sam blamed him for his part in her husband's death. Still, Sam is the one woman he can never forget. All he wants is a second chance of his own - to prove he's not the player she remembers. And Malibu is the perfect backdrop to make a girl swoon.

Except they're not alone. Someone is watching Sam and Gage's steamy off-screen romance with the most dangerous of intentions...

REVIEW
This is going to be one of those reviews that hurt me to write and will probably be bad for the author to hear.

Malibu Betrayals was not the book I thought it was going to be.  From reading the blurb, I thought I was going to get a story with a strong and determined heroine; a hunky, charming, to-die for leading man, and a little element of suspense.  I thought Samantha Dekker had come through the dark chapter in her life and was ready to regain her life back.  I wasn’t expecting to watch her constantly second guess her horrible unhappy marriage over and over again and constantly go back and forth as to whether or not she wanted to be with Hollywood heartthrob Gage Cutler.

At 359 pages, Malibu Betrayals is way too long and repeats things.  Yes, I will not deny Sam’s former husband was a vain, self-centered, cheating, donkey’s behind.  Yes, he made Sam question things about herself no woman should have to question.  Yes, his actions made it hard for her to trust anyone outside of her family.  I don’t need to constantly be reminded of it chapter after chapter.  I’m not cold-hearted, I truly felt for Sam but her back and forth with Gage was grating.  I’ve never been in Sam’s position, so I don’t know all the emotions and grieving time you’re allowed to have.  But because I know what Sam was thinking before her husband’s accident, her playing the victim role was too much and brought down what could have been a really good book.

Don’t get me wrong, there are definitely glimpses of how good this book could have been.  There were moments where I liked it and was actually enjoying it.  But Sam and her actions just kept getting in the way.

I like MK Meredith’s writing style.  Her characters are people you want to know and hear about, yes even Sam after you get past her internal issues.  MK’s scene descriptions and knowledge of the workings of Hollywood are great.  The back and forth of Sam wanting a relationship with Gage and not wanting one with him really made me want to stop reading.  The only thing that kept me going was the stalker angle the book offered.  That was easy to figure out, but I love the twists thrown in.

Sam isn’t the only one with issues.  Gage has is own insecurities with his mother that you really don’t realize until Sam finally loses it and crawls within herself.  But Gage is down to Earth, kind, and loving.  Not the Hollywood type Sam thinks he is or is accustomed to.

So, while I’m not rating Malibu Betrayals high that doesn’t mean that I’m not interested in reading more books by MK Meredith, because I am.  There’s something about her writing that does draw you in.  There’s a tiny glimpse of the hero and heroine from the next book, and I’m curious to see what all the eye looks are about and what the suspense element is going to be.