Review ~ AN OBSESSION WITH VENGEANCE by Nancy Haviland 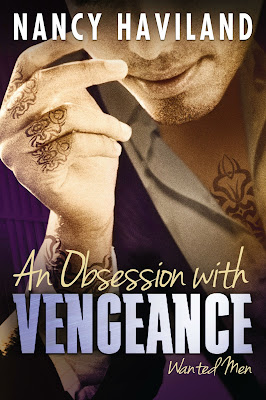 An Obsession with Vengeance (Wanted Men, #3)
by: Nancy Haviland
Series: Wanted Men
Genre: Romantic Suspense
Release Date: July 21, 2015
Source: Montlake Romance via NetGalley
Amazon | Barnes & Noble | Goodreads
Maksim Kirov is a mobster who gets what he wants, both at his posh gentleman’s club in Hell’s Kitchen and in the bedroom. Sexy, dangerous, and obsessed with control, he’s risen through the ranks to become a highly respected leader in the tight-knit Tarasov crime syndicate. He rules with an iron fist…until he meets Sydney Martin.
The Australian-born Sydney is determined to refuse Maks’s advances, despite their electrifying chemistry. The owner of a neighboring nightclub, Sydney rules her own domain. But when a deal with a Mexican drug cartel goes terribly wrong, she has no choice but to turn to Maksim and the Tarasov organization for protection. Could giving in to their intense attraction be what saves both Maks and Sydney? Or will their all-consuming passion—and her shocking secret—destroy their lives?
In the hot and scandalous third installment of the Wanted Men series, lust and loyalty clash in New York’s mob underworld.
REVIEW


An Obsession with Vengeance is the third book in the Wanted Men series.  And just like the others, it did not disappoint.  An Obsession with Vengeance is packed with multi-layered characters that you could both love and hate.  In addition to all of the darkness, violence, hatred and pain, there is a lot of love.  Love that you would not expect to see from a series that involves Russian, Italian, and Mexican mobsters.  Nancy Haviland does not shy away from the deplorable lifestyle that these people live.  Instead, she has figured out a way to make you understand why they do what they do and how they can still be respected.

An Obsession with Vengeance focuses on the most tortured member of this Russian crime family, Maksim “Maks” Kirov.  Maks owns a high profile nightclub and is infatuated with the Australian owner of a neighboring club, Sydney Martin.  She continues to play hard to get until she crosses a Mexican drug lord and must depend on Maks to keep her safe.  Maks doesn’t hesitate to protect her but he must also protect his heart.  Sydney isn’t forthcoming about everything that protecting her involves.  She has a son that she refuses to tell her protectors about.  This complicates their already volatile relationship.  Not to mention, they must pretend to be a couple in public and have a hard time keeping their hands off of each other in private.

Maks fits all of the stereotypes of a Russian mobster.  He’s arrogant, intimidating, and lethal.  He has no qualms about killing but he does it for the right reasons.  His pitiful past makes it hard to judge him for the brutal things that he does.  Plus, he doesn’t think that he deserves anything purely good in his life.  The fact that he falls for Syndey makes him that much more likable.  He puts his life on the line to keep her safe.  Of course, being a trained assassin doesn’t make that too difficult.  More importantly, his brothers in arms do not hesitate to come to his aid and treat her like part of the family.  They are a tight knit group that has tighter bonds than most real families.  Considering my own affinity towards vengeance, I could not put this book down.  I look forward to the next book.

Purchase An Obsession with Vengeance from:
Amazon | Barnes & Noble | Goodreads

The Wanted Men Series:
(Click on the book covers for more information or to purchase from Amazon.)