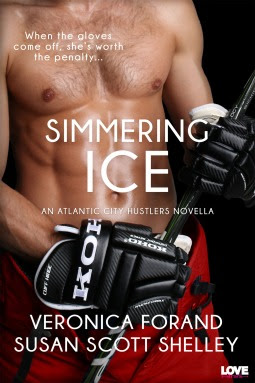 When the gloves come off, she's worth the penalty...


Physical therapist Annie Davidson is great at her job but unlucky when it comes to love. She's just out of a bad relationship. A really bad relationship. All she can do is focus on work...that is until she runs into professional hockey player Alec O'Meara. She's a touch insecure and doesn't understand why he's interested in her.

Despite being one of the biggest players on the team, right wing Alec O'Meara prefers finesse over force. After the tragic death of his wife, he likes to keep things loose on and off the ice. But the red-headed Annie challenges his beliefs and makes him think about taking their relationship to the net.

The passion and fun they share is addicting and makes them long for more. But her insecurities that she's not good enough, and his anxiety over a long-term commitment will keep them apart, unless they can find a way to break through the defenses they've built around their hearts.

REVIEW
First off, Simmering Ice, the second book in the Atlantic City Hustler series is a standalone read.  I read the first book, Flirting on Ice and knew Alec “Sequoia” O’Meara was special.  I just didn’t know how special he truly was or what demons he carried around.  Alec has had his perfect love story.  He thinks you get only one and his story ended with the death of his wife.

“She’s special.  And you have a hell of a lot in common with her.  Don’t go writing her off like you’ve done with every other woman you’ve met since Tamara.”

Annie Davidson is a physical therapist that works with children.  For pretty much her whole life, she has been chasing her mother’s approval and feeling as if she never measures up to anyone.  Annie is as sweet and nice as they come but she doesn’t know just how beautiful, wonderful, and special she truly is.

“You have no idea how you affect men.  And it’s not your looks alone.  You’re funny and intelligent and clever and the bravest woman I’ve ever met.”

What I loved about this novella was the kindness Alec showed to Annie.  Together they are playful and you see the love and respect they have for each other.  Alec is protective to the point of possibly smothering Annie, who knows how to stand her ground with him.  I also LOVE that Alec was inspired by Clay Matthews of the Green Bay Packers!!!!

Simmering Ice isn’t a closed door romance but it also doesn’t go into great detail of the bedroom action.  The Atlantic City Hustlers series is about a group of professional hockey players and this group of guys provide great advice when Alec needs it the most. There are two more guys who haven’t found the woman for them yet, and I can’t wait to get my hands on their stories.

**Received a copy from Entangled Lovestruck in exchange for an honest unbiased opinion.**

The Atlantic City Hustlers Series:
(Click on the book covers for more information or to purchase from Amazon.)

Click here for a hero profile on Alec O’Meara