Review ~ A Touch of Chardonnay by Pamela Gibson 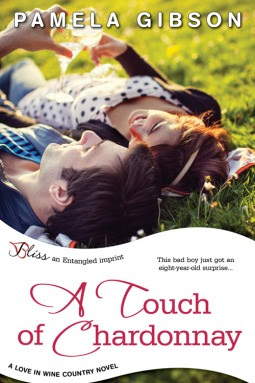 Cultural archeologist Lindsay Reynoso is in a small seaside town in California to evaluate an old mansion. When the home's owner shows up to “help” the evaluation along, Lindsay is furious. Especially as the owner is former bad-boy tennis star Christopher Brandt…her one-time fling and the father of Lindsay's son. Only he doesn't know it.


As far as Chris is concerned, the old mansion is tied to a past he's better off leaving behind. He'd rather bulldoze the thing and move on. If only his gorgeous consultant would let him. Even while fighting over the demolition, the chemistry that once brought them together is smoldering stronger than ever.

But honesty is very important to Chris, and Lindsay has an eight-year-old secret…


REVIEW
Lindsay Reynoso has been crushing on Chris Brandt since they were in high school.  In college, they got the chance to share one magical night together, with Chris saying he would call her.  That night resulted in Lindsay becoming pregnant and never hearing from Chris again.  Fast forward nine years and fate has brought these two together again.

When it comes to A Touch of Chardonnay, I must admit I'm a little conflicted.  On one hand, I can understand where Lindsay is coming from in not telling Chris about their son when she first sees him again.  But on the other hand, it drives me crazy that she doesn't tell him because she needs to make sure Chris is worthy of being her child’s father.  Lindsay spends most of the book trying to figure out if Chris is a changed man or still the out of control youth he use to be.  But as she’s trying to figure Chris out, she’s spending time with him and sleeping with him.  It’s like she’s trying to find any excuse to not tell Chris he has a son.

With that said, I actually liked both the characters.  Lindsay has raised her son Nicky with the help of her family and is a really hard worker, always feeling bad that her work takes her away from her son.  Chris for his part, has made a complete 180 and is a fun, loving, respectable business man who has worked his way from the bottom up in a company started by his father.  Lindsay and Chris both have trust issues as a result of the past.

I love romance stories with children in them.  There’s something about kids pushing the adults towards romance that I find sweet.  Unfortunately, you don’t see that in A Touch of Chardonnay.  In fact, there isn’t a lot of Nicky in the story.  I would have definitely liked to see Chris and Nicky as well as Lindsay, Chris, and Nicky interact more in the story.

While this is the second book in the series, it is completely a stand alone read.  However, if you have read A Kiss of Cabernet, you’ll be happy to know that Paige makes an appearance.

Nicola’s review of A Kiss of Cabernet

The Love in Wine Country Series:
(Click on the book covers for more information or to purchase from Amazon.)