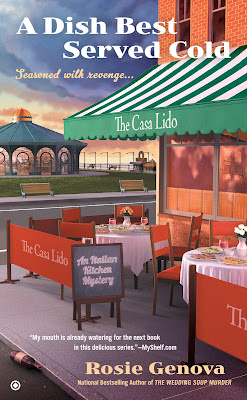 
At the Casa Lido, the end of summer means a party, and hit whodunit writer Victoria “Vic” Rienzi and her family are cooking like crazy for the restaurant’s seventieth anniversary celebration. As they chop onions and garlic, old family friend Pete Petrocelli stops by, saying he knows something that would make for a good mystery novel. Curious, Vic asks Nonna to elaborate on Pete’s claim and learns of a relative who mysteriously disappeared back in Italy…

The night of the party brings a crowd—and a full throttle hurricane. When the storm finally passes, everyone thinks they’re in the clear—until the first casualty is found, and it’s Pete. Remembering his visit, Vic isn’t certain Pete’s death was an accident and decides to dig deeper into his story. What she finds is meatier than Nonna’s sauce…

For me, characters make a story, especially when it comes to a cozy mystery.  I love the characters Rosie has created for her Italian Kitchen Mystery series.  The characters each have their own distinct personality.  Some are a little rough around the edges.  I had the wonderful opportunity to have a chat with Rosie and ask her some of my burning questions.  Check it out.

The Italian Kitchen Mystery Series is one of my favorite series.  I love the characters, but they're still a bit of a mystery to me.  Could you tell me a little about them?

Thanks, Kim; that’s wonderful to hear.

Victoria Rienzi - Okay, Vic is 33, a mystery writer who decides to head back home to her small town on the Jersey shore to research a different kind book she wants to write based upon her family—an immigration story. To do so, she goes back to working in her family restaurant, the Casa Lido. As a young girl, she had waitressed there, with the expectation that she would eventually learn the recipes. But when she suddenly decides to leave Oceanside Park, her grandmother gets angry with her, so she never formally learns to cook.

Tim Trouvare - Tim is Vic’s first love; she had crushed on him in high school, and after college they got together. Vic was planning a future with him until he unexpectedly fell for somebody else and broke up with her, eight years before the start of the series. This was the event that led to her leaving home and being estranged from her grandmother. However, Tim is slowing evolving, and it’s clear he and Vic still have feelings for each other. Too bad that hot Cal Lockhart keeps getting in the way!

Calvin "Cal" Lockhart - Bits of Cal’s story are slowly revealed in all three books, and I have to be careful how I answer this one so I don’t give too much away. More than anything, Cal’s situation has been shaped by his experiences with Hurricane Katrina back in New Orleans. There are things in his life he must keep private, even from Vic, though he clearly cares for her.

Nonna Rienzi (Vic’s Grandmother) - Ah, Nonna! Ya gotta love her. She and Victoria conflict because Nonna has not forgiven Vic for leaving the restaurant and Oceanside Park. She doesn’t approve of Tim, but ultimately, I think sparks fly between these two because they’re alike in a number of ways. They’re strong women, very loyal, and both sharp as a tack.

Frank & Nicolina Rienzi (Vic’s parents) - It’s true, they worry for their daughter, but each murder is somehow tied to the Casa Lido. So they can’t help themselves, when they ask her to look into things! Though their son is a cop, it would be a conflict of interest for him to get involved. So they reach out to their mystery writer daughter, often reluctantly, because they feel they have no choice.

Daniel & Sofia Rienzi (Vic’s brother & sister-in-law) - Sofia adores her policeman husband, and she is a smart businesswoman who runs her own dance studio. But she has a dream of entering law enforcement, which has caused conflicts between her and Danny. Circumstances (which emerge in The Wedding Soup Murder) put that dream on hold, but she has not lost her curiosity or her drive to see justice done. For that reason, she’s right there with Vic to solve the murders.

Characters tend to have a mind of their own.  Who's the hardest character for you to control and why?

Oh my gosh, Nonna! She has this tough exterior, but a really good heart. And there have been a number of moments where she surprises even me with her soft spots. I’ll be writing her one way and she’ll have a sudden impulse to hug somebody!

If you could be any one of your characters who would you be and why?

Probably Sofia. She’s smart, sassy, and brave. She’s also a dancer, which was a childhood dream of mine.

What's your writing style like?  Do you start out with an idea of how the person is going to die and then figure out who dies and why?  Or do you just somehow let the story play out?

Great question! First, I always know WHO is going to die, but I don’t always know who the murderer will be. I usually write the first three or four chapters, through the murder and discovery of the body, then stop and do a rough outline. As I progress through the book, I see how the characters take shape, provide them with back stories to flesh out motive, and the murderer will then step out from the pack of suspects.

When writing what are your must haves?

A morning walk to get me thinking. A quiet place to work. A big insulated cup of ice water. And my writer friends and I have a running joke about snacking on Cheeze-Its—legend has it that Nora Roberts can’t write without her favorite cheesy cracker. I figure if it’s good enough for Nora. . .

What are you working on now?  And is there anything you can share about it?

Right now I am concentrating on my tour for A Dish Best Served Cold and taking a small break from deadlines, but I have lots of ideas percolating. I promise I will keep you posted, though.

Thanks for taking the time to answer some questions for me.  I'm looking forward to reading A Dish Best Served Cold and finding out if dead men do tell tales.

Oh, trust me—they do! Thanks for having me, Kim. You’re the best!
Purchase A Dish Best Served Cold from:
Amazon | Barnes & Noble | BAM | iTunes | Kobo | Goodreads

Click here for my review of A Dish Best Served Cold.  There’s also a blog only paperback giveaway of the book.

You can follow the A Dish Best Served Cold Blog Tour here. 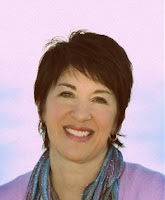 A Jersey girl born and bred, national bestselling author Rosie Genova left her heart at the shore, which serves as the setting for much of her work. Her new series, the Italian Kitchen Mysteries, is informed by her appreciation for good food, her pride in her heritage, and her love of classic mysteries from Nancy Drew to Miss Marple. Her debut novel, Murder and Marinara, was named a 2013 Best Cozy by Suspense Magazine and is a finalist for a 2014 Daphne Award. An English teacher by day and novelist by night, Rosie also writes women’s fiction as Rosemary DiBattista. She still lives in her home state with her husband and the youngest of her three Jersey boys.

a Rafflecopter giveaway
Follow
Posted by Kim at 4:15 AM