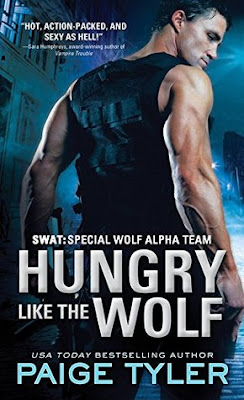 
The Dallas SWAT team is hiding one helluva secret . . . they're a pack of wolf shifters.

The team of elite sharpshooters is ultra-secretive—and also the darlings of Dallas. This doesn't sit well with investigative journalist Mackenzie Stone. They must be hiding something . . . and she's determined to find out what.

Keeping Mac at a distance proves impossible for SWAT team commander Gage Dixon. She's smart, sexy, and makes him feel alive for the first time in years. But she's getting dangerously close to the truth—and perilously close to his heart...

REVIEW
I will admit that I am not much of a reader of paranormal books.  However, I have seen more than my fair share of movies based on werewolves from The Howling to The Twilight Saga.  It’s always interesting to see how much of the mythology a writer uses to create their own version of a werewolf.  In this instance, I was pleasantly surprised to see a more realistic depiction of werewolves and their challenges fitting in with society. Paige Tyler doesn’t shy away from the vicious and killer instincts they have.  Instead, she shows us that they can be both fierce and caring.  They are loyal to a fault and still believe in finding their one true love.  More importantly, when they are strongest when they are part of a pack.

In Hungry Like the Wolf, Gage Dixon is a Dallas SWAT commander and werewolf pack leader.  His SWAT team is made up solely of werewolves.  That’s how they keep themselves and their secret safe.  They resolve situations with little carnage and are above reproach which is why they garner the attention of investigative journalist, Mackenzie “Mac” Stone.  She works for the Daily Star and is confident that the SWAT guys have a secret that needs to be shared with the rest of the world so she sets her sights on their compound and their leader, Gage.  Mac convinces Gage to give her full access to the team which he agrees to knowing that it’s the only way that he can steer her away from their only secret.  Of course, sparks fly and they have a hard time keeping things professional.  Their time between the sheets is smolderingly hot and the author does a great job building up to it.

Everything changes when the SWAT team gets involved in a hostage situation that is related to the local rich bad guy.  Loyalties are tested and the werewolves’ best kept secret is on the verge of being exposed.  So, lines are drawn and vengeance becomes the word of the day.  Where there is vengeance and werewolves, there is bound to be a lot of growling, howling, and violence.  Hungry Like the Wolf really comes together at that point.  I was able to get a good visual of the werewolves in combat and they don’t disappoint.  It was easy to cheer on the wolfpack as well as hope that Gage and Mac’s relationship survives in the end.  You will have to see for yourself.