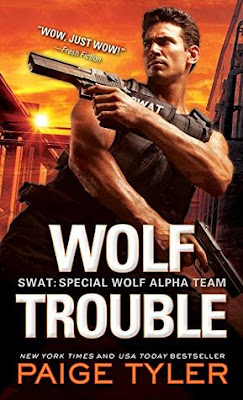 
He's in trouble with a capital T

There's never been a female on the Dallas SWAT team and Senior Corporal Xander Riggs prefers it that way. The elite pack of alpha male wolfshifters is no place for a woman. But Khaki Blake is no ordinary woman.

When Khaki walks through the door attractive as hell and smelling like heaven, Xander doesn't know what the heck to do. Worse, she's put under his command and Xander's protective instincts go on high alert. When things start heating up both on and off the clock, it's almost impossible to keep their heads in the game and their hands off each other...

REVIEW
Wolf Trouble is the second book in the SWAT series about a team of tactical officers that are also werewolves.  While it may be helpful to have read the first book, Hungry Like the Wolf, this one could be read as a standalone.  Although Wolf Trouble is a paranormal book, it focuses a lot on real world issues such as jealousy, love, abuse, and family which made it that much more enjoyable to read.  I found all of the characters relatable and was very interested in their happiness.

Wolf Trouble focuses on SWAT Corporal Xander Riggs and the team’s first and only female recruit, Khaki Blake.  To start, I had a hard time getting past the name Khaki. Hopefully, it has some meaning for the author because it made it difficult to visualize Khaki as a sexy woman.  Nonetheless, the SWAT team is pressured into adding a female member to their all male team.  Since the fact that they are werewolves is a secret, they couldn’t just grab any police officer off the street to join their team.  Lucky for them, Khaki was involved in an incident with her former police force that gave SWAT Commander Gage Dixon reason to believe that she was indeed a werewolf and a perfect fit for their Pack.  Of course, she also ends up being a major lustful distraction for Xander who end up being her team leader.  Unbeknownst to each other, they are meant to be together but they spend most of their first interactions trying to hide their true feelings which is very difficult since Xander has to not only train her to be a SWAT member but also to be a fully functional werewolf.

It’s very romantic to think that all werewolves have one person out in the universe that they are destined to pair up with.  However, none of the pack members truly believes it except for Gage.  Khaki is a newly transformed werewolf so she has no idea about her own abilities, let alone the concept of “The One”.  Once Xander and Khaki give in to their feelings, they have some fairly hot sexual encounters.  They also decide that they will hide their relationship from the pack.  Everything becomes even more complicated when they are tasked with assisting the Feds in taking down some bank robbers while Khaki is also being harassed by her ex-boyfriend.  The way things play out is very entertaining and thankfully, very straight-forward.  There’s violence, explosives, and guns to go along with all of the rainbows and sunshine.