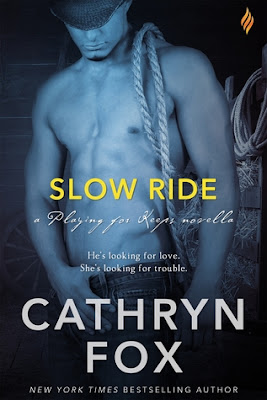 As a successful doctor and weekend cowboy, Chase Cooper enjoys a full life with plenty of female company. But lately, something hasn't felt right. He's been distracted. Antsy. Damn it, he's been lonely. With an eye on settling down with a nice girl, Coop invites his high school best friend down to his ranch to see if maybe she's the one for him...

Instead, her twin sister shows up. The one who loathes him.

Julia Blair is already halfway to Coop's ranch when she learns the invitation wasn't for her, but her vivacious twin sister. She has two choices: slink back home, or see just how far this farce will go. One glance at hotter-than-sin Coop, and she knows she's playing a dangerously hot game. Because what this cowboy wants, this cowboy gets...

Previously released on Entangled's Flaunt imprint as Cowboy's Way - November 2013 and has been enhanced with new material.

REVIEW
Slow Ride is the first novella in Cathryn Fox’s Playing for Keeps novella series.  The series focuses on three best friends who reminisce about the one high school girl who got away and their plan to get her back.

In high school, Chase Cooper was captain of the soccer team and Mari Blake was head cheerleader.  The two were always hanging out together, sneaking into each other’s bedrooms.  While everyone thought they were an item, they were merely just best friends without benefits.  The actual object of Chase’s affection was Mari’s twin sister, Julia.  Unfortunately, Julia was his best friend’s sister, making her off limits.  They ran in different circles and the one time the two were actually alone together, Julia told Chase in no uncertain terms that he was not her type.  Flash forward ten years and Chase and Julia are about to get a second chance at a love story that never was.

While I enjoyed Slow Ride, I did have some issues with it.  I will not deny this was a hot little novella, but the issue of Julia not knowing how far Mari and Chase went and the extent of their relationship, but still sleeping with him bothered me.  They’re sisters, that’s a line you don’t cross without getting clearance to do so first.  Due to the length of the story, I wasn’t able to form a true connection with the characters.  Julia and Chase seem like nice people but what really got them to this point in their lives?

Slow Ride is a happy for now story.  I would have preferred to have a happy ever after ending.  But, I like the premise of this series and I’m looking forward to reading Wild Ride and Sweet Ride.

The Playing for Keeps Series:
(Click on the book covers for more information or to purchase from Amazon.)