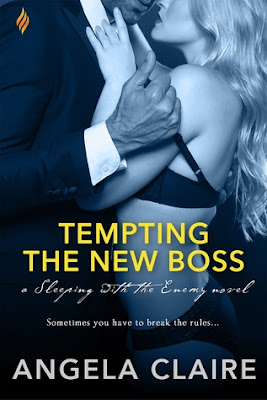 Sometimes you have to break the rules…


When Camilla Anderson loses her job just as a position at Talbot Inc. opens up, there's no way she's questioning the lucky break. Working for the quirky, reclusive CEO will pay off her student loans within a year, and they're flying to Europe in his private jet.


Mason Talbot isn't good at talking to women. Well, to anyone, really. But when his new lawyer boards his plane, biology kicks in. But he can't tell if her adverse reaction is to him or his painfully awkward attempts at flirting.
As the flight gets bumpier, Mr. High IQ gets calmer. And…he holds her hand? Maybe the guy is redeemable after all. As soon as they land, she'll have to teach her endearingly awkward new boss how to seduce a girl properly.


That is, if they don't die in a fiery plane crash first.

Tempting the New Boss is the latest book in your Sleeping with the Enemy series from Entangled Publishing’s Brazen line. Can you tell me a little about the book?
The book is about an affair with the boss, a plane crash and getting stranded in the freezing wilds. And that’s just on Camilla Anderson’s first day on the job!

What three words would you use to describe Mason Talbot and what do you love about him?
Eccentric, brilliant and sexy! I love his awkward approach to flirting. There’s a scene where Mason and Camilla are on the plane that still makes me laugh. Trick Question figures in heavily.  But what I love most is how big-hearted Mason turns out to be under the rough exterior. He starts out seeming arrogant, but I hope readers bear with him because as Camilla gets to know more about him, it’s clear he’s sweet and warm and even vulnerable.

Was there anything about Camilla Anderson which surprised you?

I could say I was surprised she sleeps with the boss on her first day of work (oops, spoiler alert, but hey, it’s a romance!). To be honest, though, I wasn’t all that surprised.  And it’s not just because Mason is so hot. It’s because I think most people are a mass of contradictions. Camilla is wound pretty tightly when it comes to her career, but weighing against that is a sexy, spontaneous side that doesn’t like the daily grind and wants to do something else. So the fact that she lets her wild, emotional take over even as she claims to always be sticking to the rules didn’t surprise me at all.

What’s your favorite scene in Tempting the New Boss and why?

It’s the scene on the plane (before the storm!) where Camilla is trying to keep her head after Mason has just violated every rule of modern office politics and gone for the nuclear option – boss wise – right off the bat. Not to give it away, but he, er, doesn’t have a very good filter and she tries to explain to him why he can’t say what he just said, all the while trying to figure out ‘ who is this guy?’

Are you a plotter or a panster?

Pantser all the way. My plots just sort of happen.

What do you think Camilla and Mason would say about you as their author and creator?

Hmmm, well I guess Mason probably wouldn’t think of me at all. He’s very single-minded. But if he did, he might think I was a little hard on his wardrobe. Camilla would, I hope, say that I’d gotten the big family vibe down right. Since I come from a family of ten, I know a little bit about those dynamics.

Okay. Now, I want to get to know Angela Claire personally. I might have done a little author stalking to prepare for this interview. I might have even laughed when I read about your job and what you said about the boardroom. Has anyone figured out that you are the Angela Claire?

Not enough for anyone to confront me (for one thing they’d have to admit to reading romance!). But seriously, I don’t think anyone would ever suspect me of being a closet romance writer because I’m usually viewed as a hard-edged corporate lawyer. I think most guys I work with would be surprised I have a romantic, happily-ever-after side. I did tell my boss about my writing, but I cheated and didn’t tell him my pen name. So he’ll never figure it out.

I believe you live in Michigan. Fall has just started and temperatures are dropping. What’s your favorite season and why?

Fall is definitely right up there…the changing leaves, the chill in the air, the cuddling up in front of the fireplace. (I’m sitting in front of a blazing fire right now.) Winter would not be my favorite. In Michigan the snow is brutal and can last from November to April. Sometimes we have to go up on the roof to shovel because the accumulation is so heavy that it could cave the whole house in. And as to Spring, we don’t have much of one. One or two temperate days and we slide right into summer. Summer’s not bad, but this last one was a scorcher for us. Hard to remember it fondly (until that umpteenth snow fall, that is).

It’s 10pm on a Friday night. Where are you and what are you doing?

Sleeping. Just kidding. I’d probably be watching T.V. with my husband at home. Maybe Orphan Black or a rerun of Banshee. But if it was a Friday where we got really inspired, we might walk into town and have a beer at the local craft brewery. We live less than a mile walk to the center of the small community we live in, so a stroll is never out of the question, no matter what the time!

What’s the one thing you can’t live without?

Is there anything I left out which you would like to add?

Only that Tempting the New Boss is a story of family and feeling different. This novel was one that just poured out of me. I loved writing it.
Okay, final question. (Sorry, I heard "Who What's to Be a Millionaire" in my head.) I know you just released a book, but I’m pretty noisy, when it comes to what authors are working on. So, are you currently working on anything at the moment?

I have a manuscript with my agent right now which is a little different for me as it’s a straight mystery, with a little romance thrown in, and I spend most of my time checking my email every three seconds to see if anything’s happening on that one. I need to cut that out so that I can get back to actually writing something else! I have quite a few WIPs that I have started and, for one reason or another, put down. One is set in Long Island and has a mysterious man showing up on the beach. One is a historical romance. So I’ll probably work on one of those.

Thank you so much for answering some questions for me.

Thanks for having me!

Sleeping with the Enemy Series:
(Click on the book covers for more information or to purchase from Amazon.) Angela Claire, like most writers, grew up loving to read, which led to a degree in English literature, which in turn led to unemployment. Not having been born to wealth, Angela developed a more practical plan for eating and paying her rent—hence the dreaded and expected descent into law school and inevitable career as a lawyer. Once she paid off her pesky yet massive student loans, Angela saved for an escape from the law profession one day. Now a multi-published author, she does what she loves, but with a little less leeway on the eating and paying rent thing. She is represented by Kerry D’Agostino at Curtis Brown, LTD.