An interview with Stefanie London, author of A DANGEROUSLY SEXY CHRISTMAS 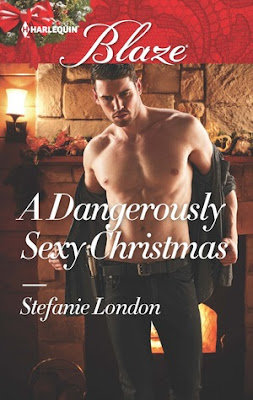 Aspiring jewelry designer Rose Lawson doesn't want a bodyguard. Especially the hot, muscle-y one her father hires after a break-in at the jewelry shop where she works. It's only when her home is also ransacked that Rose realizes the sexy (but infuriating) bodyguard might come in handy…especially on a cold winter's night.

Max Ridgeway is a former Aussie cop who's got something to prove in New York. He's convinced that someone dangerous is behind the robberies and that Rose needs protection. His protection. But what's even more dangerous is the sexy tension between them—because a hot little fling could compromise their lives…and his heart.

As if it wasn’t bad enough to have her place of work and her house broken into, now she had to reveal the sorry state of her personal life to Mr. GI Joe Wannabe. The super-hot, muscled-beyond-belief GI Joe Wannabe.


Rose cringed; there was no way she was going to stay with her dad. It’d been eleven years since she’d seen him, and they were far from being a happy family. Rose hadn’t wanted to reconnect with him, but after she’d moved to New York, he’d pushed harder for a reconciliation.


Staying in London hadn’t been an option, not with memories of her mother lingering on every corner. New York was the only other place she’d known to be home, but coming back here had meant starting from scratch…again. She hadn’t kept in contact with a single schoolmate or friend. But that didn’t mean she was ready to trust her father yet.


“Like I said, I’ll be fine here.” Rose took a long, slow breath and ordered herself not to cry. She was not going to let Max Ridgeway see her crumble.


As much as she wouldn’t admit it aloud, she was starting to agree with his earlier assessment that this situation was more than a simple robbery. She wasn’t rich by any means, but there were several things in her apartment that would fetch a few dollars. The strand of cultured that had belonged to her mother, for one. Not to mention her electronic equipment, including the new laptop she’d bought at duty free, and the iPad on her bedside table. All of it untouched.


A wave of emotion washed over her, causing her stomach to rock like a buoy in rough waters. Sighing, she looked through the apartment. If she hung out in the entrance she could pretend it had never happened.


“Come on,” Max said, his hand landing briefly on her shoulder before he jerked it away as if he’d changed his mind about touching her. “You can’t stay here. Let’s pack you a bag. We can call the police and tackle the clean-up tomorrow.”


His voice was crisp and businesslike, but the furrow of his dark brows and the determined set of his deep brown eyes spoke volumes. He was invested in taking care of her. His commitment seeped from every pore. Despite the chaos around her, Rose felt safe for the first time in a long while…as much as she hated to admit it.


The only person who cares about your safety is the one guy getting paid to do it. Typical.


Trusting someone else was uncomfortable, like a jacket that hugged too tight and squeezed her insides just enough to make breathing hard. Trust made her palms itch and her eyes dart. She never left her well-being in the hands of another person. She was her own protector, her own teacher, her own motivator. Everyone else sat at the periphery, whether she wanted them to or not.


“I don’t know about the police,” she said, shaking her head.


“I’m worried about the jewelry store’s reputation. Someone posted about the break-in on a blog, and we had customers questioning whether our security was up to scratch. We do a lot of repair and repurposing, but customers are worried to leave their items with us now.”


“It’s not your store to worry about.”


“Part of it is,” she insisted. “I have a dedicated space for my work. I’m building my clientele. It’s not just a sales job for me. It’s a platform to start my own business.”


“They have no leads in the store break-in. And it doesn’t look like anything was stolen here.”


“We’ll go through it all tomorrow to be certain, but we still need to sort where you’re going to stay tonight.”


She opened her mouth to protest, but tiredness had seeped into her limbs, deadening them and dampening her desire to argue. Right now she wanted a hot bath and a large glass of denial. Tomorrow she would formulate a plan.

Hi Stefanie.  Welcome Read Your Writes Book Reviews.  How are you?
I’m well, thanks for having me! (smiles)

You’re welcome.  I know your name, but unfortunately I haven't had the pleasure of reading any of your books.  Can you tell me about yourself briefly?
Sure. I’m a romance author of contemporary stories with humour, heat and heart. I’m also an avid reader, caffeine addict, a former makeup artist and banking industry escapee. As of this year, I’m writing full time and can gladly say that I have achieved the dream I set myself a little girl.

Your latest book, A Dangerously Sexy Christmas is the first book in your Cobalt and Dane Security series.  Tell me a little bit about the series and how many book you plan to have in it.
It all started with one book but I’m now contracted for six – funny how that happens. The series is based around a group of people who work together at the Cobalt & Dance Security Company and many of them are ex-FBI/Police/Military. Each story features a slight mystery/suspense aspect but these are still very much contemporary romances at heart. I’ve just finished up with the second book (A Dangerously Sexy Affair which comes out next April) and am now getting ready to work on the third one.

Tell me about Rose Lawson and Max Ridgeway.  Their first meeting didn't seem too friendly.
No, it wasn’t the most pleasant of meetings for the two of them (I’m such a mean author haha). Rose Lawson has had a very rough childhood; her mother whisked her away to London when she was sixteen and she’s only just returned home to New York and is finally rekindling the relationship with her father, whom she hasn’t seen for over ten years. Max is in New York because he’s running away from something terrible that happened while he was working for the Victorian Police back in Australia. He’s struggling to come to terms with this event but at the same time he’s deeply missing his family and his home.

These two are thrown together when Rose is faced with a break-in at the shop where she works, although nothing is actually stolen. Max is hired by Rose’s father to be her bodyguard and he feels the whole break in is very suspicious. But Rose, used to fending for herself, doesn’t want anyone following her around. So they’re locking horns on page one.

You're originally from Australia, but now live in Canada.  What was it like making such a BIG move?
It didn’t seem like a big deal at the time, but looking back I’m not sure why I wasn’t more daunted by it. We decided within a month that we wanted to come here (having never been to Canada before…and I had only seen snow once in my whole life!) and then we packed two suitcases each and left Australia. We had no jobs, no place to live…it was like starting our whole lives over again. But I’m so proud that we did it, it was a great experience and it’s worked out very well for us. We’re having the time of our lives, but I do miss Australian coffee so much!

Releasing a Christmas book means you have to write and edit it during the Spring and/or Summer.  How did you get into the Christmas frame of mind?
Well, being an Aussie Christmas is in the midst of summer for us. So writing a Christmas book with snow and cold weather would have felt strange anyway. Luckily, by the time I wrote this I’d had one winter in Canada, so I actually had an idea of what it was like to be somewhere cold for the holidays. I also do a Pinterest board for each of my books, so I got into the mood by pinning lots of festive images.

What's your favorite part of a book to write? (Beginning, getting to know each other, first kiss, big conflict or the declaration of love.)
The sex scenes. It might sound funny, but it’s true! I love building up all that delicious tension between two characters and then finally seeing them give into one another. I also think these scenes can lead to a lot of things being revealed about a character because you’re stripping them of their inhibitions and forcing them to be vulnerable to another person. It’s where we get to see what they’re really made of.

What's next for you?
So many things! I’m part of a multi-author box set which comes out in December and features seven Aussie and NZ Christmas stories. My contribution is part of my indie series based on the fictional small town of Kite Harbor.

I also have three more books on the go for Entangled Publishing as well as the Cobalt & Dane series for Harlequin Blaze. So it’s a busy time, that’s for sure!

Thank you for your time and answering some of my questions.  Is there anything you would like to add?
Thanks so much for having me on the blog, it’s been an absolute pleasure.

To find out more about her upcoming released be sure to sign up for her newsletter: http://eepurl.com/bbhIsD