Bliss ♥ Review ~ FALLING FOR HER ENEMY by Victoria James 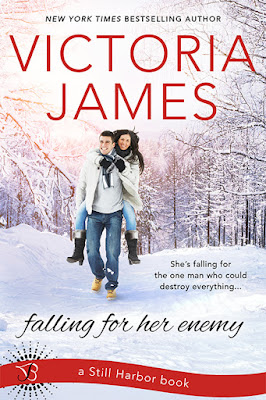 She's falling for the one man who could destroy everything...
Alex McAllister always dreamed of a life filled with the laughter and love of a family, but being abandoned at a young age left her wary of letting anyone in. Now that she's settled in Still Harbor, Alex struggles between keeping her distance and the magnetic pull of the handsome stranger who claims he's the biological father of her adopted daughter.


Hayden Brooks never wanted to be a father. Long hours spent building his family's real estate empire suits him just fine. But when he discovers an ex put the baby he unknowingly fathered up for adoption, his world crumbles. He tracks the child to Still Harbor with the intention of bringing her home-and comes face to face with his daughter's stunning adoptive mother.

The paternity test is in. And Hayden's about to make the most shocking decision of his life, just in time for Christmas...

REVIEW
When it comes to me reading and reviewing books by Victoria James, I feel like a broken record.  Her stories are emotional, heart-warming, and at times, tear inspiring. These attributes are what make her one of my favorite authors, if not favorite author.

Alex McAllister and her foster sisters Kate and Cara all met and grew up in foster care. Together, they vowed to each adopt a child and raise those kids together in a loving environment, something they didn’t have.  Alex’s world is shattered when she discovers a man who thinks that he’s her daughter Cassy’s birth father.

Hayden Brooks is blindsided when a one-night stand shows up on his doorstep seven years later, claiming he fathered a child she put up for adoption.  He doesn’t believe the woman but knows if he does have a child in the world, he has to be in that child’s life and possibly get custody.  Hayden flies cross country from Vancouver to Toronto to get answers.  He isn’t prepared for the connection he feels to Cassy or the attraction and protectiveness he feels for Alex.

Alex is put in a horrible situation from the start of the book.  All she wants to do is own her own bakery and be a mother to Cassy.  Both of those hopes and dreams are teetering on the brink of not happening.  To say my heart broke for Alex is an understatement. Hayden has his reasons for wanting to take Cassy with him if he is in fact her father. The situation these two find themselves in is really a no-win situation.  No matter what, someone’s going to get hurt.

I love all the characters in Falling for Her Enemy and the Still Harbor series.  For a six-year-old, Cassy is pretty grounded and very vocal.  She definitely carries her own in the story.  Alex and Hayden have this push and pull relationship.  They each want to like the other, but they have to remember in the end that only one is going to get Cassy. When they do give into their attraction, it’s beautiful.

Victoria James continues to write amazing stories.  I have no clue how she does it. Falling for Her Enemy is emotional and does evoke tears.  It’s heart-warming, making you want Alex, Cassy, and Hayden to become a family.  With all the emotions the book stirs, Victoria has put in funny moments.  My tablet can attest to having my latte spewed on it.  If you aren’t already a fan of Victoria James, this book will make you become one.

**Received a copy of the book courtesy of Entangled Publishing for an honest and unbiased opinion.  I’ve also purchased the book.**

The Still Harbor Series:
(Click on the book covers for more information and/or to purchase from Amazon.)

Falling for the P.I. ~ Review