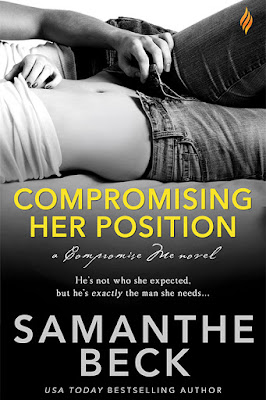 He's not who she expected, but he's exactly the man she needs…


When Chelsea Wayne drags Santa into a supply closet for a little office party nookie, she assumes the man in the suit is her on-again/off-again coworker boyfriend. Instead, it's Rafe St. Sebastian, a man known for his hard-driving ways in business as well as the bedroom--and, kill her now, the brand spanking new owner of Las Ventanas--who grants her naughtiest Christmas wishes.

So much for her reputation, not to mention her career.

Rafe needs to close three acquisitions to prove to his father he's ready to take the helm of St. Sebastian Enterprises. A hot interlude in a supply closet after deal number two seems like the perfect illicit Christmas bonus. Unfortunately, when that "bonus" becomes the key to the final deal, he finds himself back in bed--so to speak--with Chelsea, and after their steamy tryst, he's not interested in keeping things professional…
REVIEW
I initially picked up Compromising Her Position thinking it was going to be a Christmas romance.  Turns out it’s not.  The story does however span from early December through Valentine’s Day.

In an uncharacteristic moment, Chelsea Wayne sees Santa Claus and thinks it’s her boyfriend, shoving him into a closet, the two have a quickie.  Chelsea realizes things feel different, but thinks her boyfriend is just as excited as she is.  Rafe St. Sebastian is surprised that the beautiful Chelsea kisses him and wants more.  He’s more than happy to give her everything she’s asking for.  It isn’t until Chelsea says goodbye that Rafe realizes she thinks he’s someone else.

When Chelsea realizes her mistake, her life as she knows it starts to fall apart. Unfortunately, Rafe isn’t done with her yet.  On the surface, Chelsea and Rafe seem to only have a sexual relationship, lacking true caring emotions.  I can only assume the two got to know each other off the pages.

Compromising Her Position wasn’t anywhere near my favorite Samanthe Beck book. However, the smexy times are good, there was definitely a laugh or two and I liked the characters.

Chelsea is a good girl who has always played by the rules.  Playing by the rules has always resulted in her getting hurt, but she still tries.  “Every single one of my relationships follows the same pattern. I trust. I give. I get dumped.”  Rafe is driven to prove to his father and the board of St. Sebastian Enterprises he’s ready to take the helm of the company.  He has a public persona that isn’t who he truly is.  He doesn’t believe in marriage and happy ever afters.  I was under the impression Rafe would be the ultimate of dirty talkers.  In that aspect, he fell short.  But don’t get me wrong.  Rafe is still good at all the right times and in all the right places.

Chelsea and Rafe manage to bring out sides of each other neither knew they possessed. Rafe brings out Chelsea’s passionate side, where she makes Rafe think about someone other than himself.  Through hurt, pain, and misunderstandings the two realize that when it comes to love there is no compromise.  I’m glad this is the first book in the Compromise Me series.  There are definitely a couple of characters I would really love to get to know better, namely Laurie, Chelsea’s best friend and Arden, Rafe’s sister.