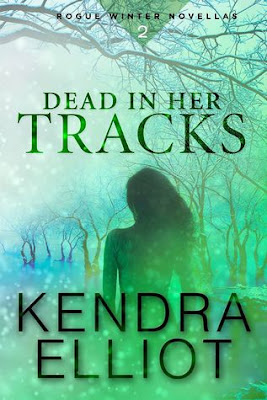 Dead in Her Tracks (Rogue Winter Novella, #2)
by: Kendra Elliot
Series: Rogue Winter Novella
Genre: Romantic Suspense
Release Date: November 17, 2015
Source: Publisher ~ Montlake Romance
Amazon Kindle | Amazon Audio | Barnes & Noble Audio | Goodreads
On Christmas morning, Solitude, Oregon, unwraps murder…
This wasn’t how Police Chief Zane Duncan expected to spend his first Christmas with fellow officer and girlfriend Stevie Taylor. But when a local motel calls in the discovery of a dead body, the couple’s holiday takes a grim turn. This is the second murder in Solitude within the week, despite the fact that their primary suspect is already in custody. Together, Zane and Stevie must face a disturbing truth—their small town may be harboring two killers.
As their investigation digs deep into the backgrounds of newcomers and longtime residents alike, Zane and Stevie also struggle to adjust to life under the same roof. Even if the stress of homicides and cohabitation don’t bring an end to the couple, the murderer lying in wait just might.


REVIEW
Dead in Her Tracks is the second book in the Rogue Winter Novella Series.  It picks up right after the events that happened in the first novella, Tracks of Her Tears.  Although, it’s a different author, the pace picks up perfectly and I felt like there was a deeper look into this group of characters as opposed to the first group.  The possibility of two killers preying on the small town of Solitude, Oregon becomes more clear and intriguing in this installment.  You have to read Tracks of Her Tears first, in order to truly get the full understanding of the situation.

This time, the spotlight is on Solitude police officer Stevie Taylor and police chief Zane Duncan.  The fact that they are dating adds an interesting dimension to the search for the serial killer.  In the prior novella, Stevie’s brother Bruce had a brush with one of the killers and barely survived.  Unfortunately, Bruce’s girlfriend was among one of the victims.  The fact that this is a small town makes everything seem to be personal to the town and the police.  Zane finds it very hard to believe that his town is harboring brutal killers.  At the same time, reminders of mortality have a positive effect on the romance between Stevie and Zane.  The small town interactions appear to be very genuine and easily illustrate how easy it is for a killer to hide in plain sight.  As with most mysteries, the identity of the killer isn’t revealed until the end.  I had no idea.

There’s so much more to say but I can’t get into much because every detail would give it away.  I will say that the romantic component was sweet and you can’t help but like Stevie and Zane.  They are truly meant for each other.  Everything was well-balanced.  I look forward to the next novella in the series.

The Rogue Winter Series:
(Click on the book covers for more information or to purchase from Amazon.)

Tracks of Her Tears ~ Review