Review ~ ROLLING IN THE DEEP 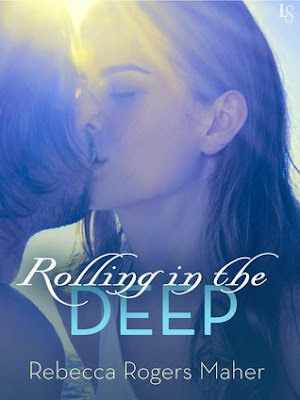 
In this raw, moving novel for readers of Jill Shalvis, Molly O’Keefe, and Karina Halle, two kindred spirits share a winning lottery ticket—and discover what it really means to get lucky.

Holly Ward is stretched to the breaking point, raising her young son alone and working long hours for minimum wage at a local superstore. Sure, she’s noticed the new guy with the easy grin and warm brown eyes, but she’s learned the hard way that relationships aren’t worth the pain. Still, when he invites her to split a lottery ticket, she figures a little innocent fun couldn’t hurt. The last thing she expects is to score big, which is exactly what happens . . . in more ways than one.

From the moment he meets Holly, Ray Lopez is drawn to her quiet dignity and open-hearted beauty. And when they hit the jackpot together, he’s thrilled that the single mom can give her kid a better life. The only problem is the chaos surrounding them: lawyers and reporters swarming, friends and family angling to get their cut. In all the chaos, Ray discovers an oasis of calm and passion in Holly. But with the stakes higher than ever, winning her trust could cost him everything.

REVIEW
Rebecca Rogers Maher is different than most authors I have read.  Her characters aren’t squeaky clean, slightly tormented people.  Her characters are real and tortured and tormented in ways few will understand.  I love that about her writing.  I’ve read enough of her books to know I have to prepare myself to be mentally and emotionally spent after I’ve finished reading her books.

Rolling in the Deep isn't as deep and gut wrenching as I expected.  For Rebecca, it was probably one of her lighter reads.  But don't get me wrong,  the characters are still tortured and tormented souls.

Ray Lopez is trying to deal with the death of his mother.  Her dying wish was for him to go to culinary school.  In order to do that, he moves from his home and family to upstate New York.  He’s a really good guy, trying to live his life and make good on a promise.

Holly Ward is a divorced single mother, raising an eight-year-old son.  Her ex-husband is and was verbally and emotionally abusive.  When she finally found the courage and strength to leave,  his attacks worsened.  He eventually married a woman who allowed him to move up in class status and money.  That was something he took great pleasure in rubbing in Holly’s face.

Holly and Ray meet when he starts working for Cogmans, which is like a warehouse membership store.  Holly is the first person at the store to truly be nice to Ray and his infatuation for her grows.  Ray convinces Holly to go 50/50 on purchasing one lottery ticket.  The two joke about all the money they could win and what they could do, never dreaming they would actually win.  When the unbelievable happens, the two are thrust into the limelight and a life they have no idea how to navigate.

Rolling in the Deep is told in first person from the point of view of both Holly and Ray. It’s a touching story of what happens when the amazingly unimaginable happens, from winning a multimillion dollar lottery to finding love.  Holly has been beaten down by life and circumstances and lacks self confidence, but she manages to find the strength and determination to claim her life back and no longer allow herself to be a victim. Together, Ray and Holly learn to deal with their individual losses and find the friendship and love they truly deserve.

Throughout all the ups and downs and life changes Holly and Ray have endured, they each have one person on their side to support them.  For Holly, it’s her best friend Beth. For Ray, it’s his older brother Tony.  I’m excited these two will have the potential to have their own happy ending in Just Give Me a Reason.

**Received a copy from Loveswept in exchange for an honest unbiased opinion.**

Just Give Me a Reason is a related book to Rolling in the Deep, featuring characters mentioned in the book.  Just Give a Reason comes out February 16, 2016.  You can pre-order it from Amazon and other eRetailers now.