Review ~ IN THE COMPANY OF WOLVES by Paige Tyler 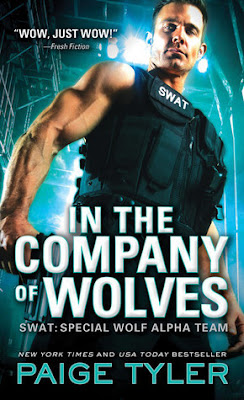 He opened his mouth to order her to drop the MP5 she had aimed at him, but nothing would come out. It was like she’d robbed him of the ability to speak. Shooting her wasn’t an option, though. And the idea of arresting her didn’t make him feel any better.

There's a new gang of criminals in town who are organized and ruthless in the extreme. When Eric Becker, along with the rest of the Dallas SWAT team, ends up in the middle of a shootout, he immediately senses werewolves-a lot of them. Turns out, the new bad guys are a pack of wolf shifters.

In a spray of gunfire, Becker comes face-to-face with the most gorgeous woman he's ever seen. Becker does the logical thing. He hides her and leaves the scene with the rest of his team.

Jayna Winston has no idea why that SWAT guy helped her, but she's glad he did. Ever since she and her pack mates got mixed up with those Eastern European mobsters, everything had pretty much fallen apart.

So what's a street-savvy thief like Jayna going to do with a hot alpha-male wolf who's a police officer?

REVIEW
In the Company of Wolves is the third book in the Dallas SWAT series that focuses on a pack of werewolves that are also SWAT members.  In order to truly understand the relationships and the mythology, it’s best that you read the other two books.  There is a theme regarding “The One” that ties together all of the books.  While I do appreciate the concept of there being one soulmate for every werewolf, I would like to have seen that take a backseat to some other details regarding the wolf pack that we still don’t know yet. I feel the series will become stale if the focus remains the same throughout.

Eric Becker and Jayna Winston are instantly attracted to each other from the first time their eyes meet.  Neither of them can explain their feelings but one of them is certain that they have found “The One”.  With Eric being law enforcement and Jayna being a criminal, it’s hard to imagine them ever being a couple but circumstances bring them together causing them both to make some bad decisions that could prove to be deadly. They are a very likeable and intriguing couple with very different back stories that I liked.  The introduction of other types of werewolves was also a plus.  Paige Tyler did a great job of adding some more layers to werewolf lore.  It would be difficult to say anything negative about the imagination that has gone into this storyline.  With all of the movies and books written on werewolves, it’s impressive to see someone still able to provide readers with more insight.

I thought In the Company of Wolves,  itself was good but it could have been better. After reading Hungry Like the Wolf and Wolf Trouble, this one was very predictable.  I hope to see more plot twists in future books from the SWAT: Special Wolf Alpha Team series.

Purchase In the Company of Wolves from:
Amazon | Barnes & Noble | Goodreads