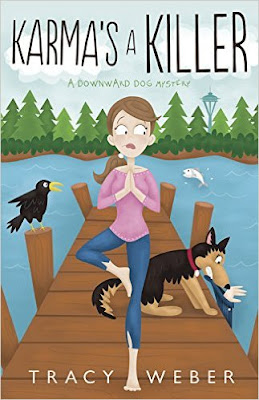 When Seattle yoga teacher Kate Davidson agrees to teach doga (yoga for dogs) at a fundraiser for a local animal shelter, she believes the only damage will be to her reputation. But a few downward-facing dogs are the least of Kate’s problems when an animal rights protest at the event leads to a suspicious fire and a drowning.

The police arrest Dharma, a woman claiming to be Kate’s estranged mother, and charge her with murder. To prove Dharma’s innocence, Kate, her boyfriend Michael, and her German shepherd sidekick Bella dive deeply into the worlds of animal activism and organizational politics. As they investigate the dangerous obsessions that drive these groups, Kate and her sleuthing team discover that when it comes to murder, there’s no place like hOMe.

For the Love of Crows.

Crows are everywhere in Seattle.  Like most people, I basically ignored them until a few years ago. Then my dog, Tasha—who is the inspiration for Bella, the huge, unruly German shepherd in my Downward Dog Mystery series—befriended one.

At first I barely noticed the crow that always landed near Tasha on our daily walk at Green Lake Park, but eventually, he caught my attention. I generally can’t tell one corvid from another, but this crow had a funny punk rock thing going on with his feathers. I thought it was odd that he landed so close to Tasha and that she (who up until that point had been terrified of crows) didn’t run away. I tossed him a dog treat every now and then, but I didn’t think much of it.  I assumed it was coincidence that we saw him every day.  He lived at Green Lake, after all.

Then, one day while we were still about five blocks from the lake, Tasha started pulling me toward a group of crows on the opposite side of the street.  I wouldn’t let her cross, because I didn’t want her to disturb them. I told her that if we approached them, they would fly away. I even assured her that none of them were her crow.

Tasha was obviously frustrated, but she finally—and atypically—obeyed.
One of the crows broke off from the rest and flew behind us, block by block, until we reached Green Lake.  When we got to our “normal” spot, he landed beside Tasha, punk rock feathers and all.

Now I was intrigued.  Not only did the crow recognize Tasha and me, but Tasha knew her crow—even when he was across the street surrounded by other crows.

I started to pay attention. On future walks, Tasha pointed out her crow to me on a tree branch ten feet overhead and far away, across a grassy field.  For his part, the crow started introducing us to his friends. Soon, three to five crows joined us every walk. During nesting season, the people around us were aggressively dive bombed by crows that warned them away from their young.  Tasha and I walked through the same area unscathed. Her crow friends hopped along the ground beside us, escorting us.

Tasha grew older and more arthritic. Her walks grew shorter. We eventually had one of her hips surgically replaced, which meant that for several months she was unable to walk at Green Lake. I felt brokenhearted, knowing that our crow friends would likely forget us.

Six months after her surgery, I took her back to Green Lake for the first time. Her crow friend greeted us at our usual spot, as he still does each day.

I’d like to think the crows love me, but the truth is, they ignore me when I’m not with Tasha. And on the occasions I’m out of town, they greet Tasha and my husband at that same place. I still don’t know what magical connection that first crow has with my dog, but I think it’s lifelong, in both animals.  I’ll never look at crows the same way again.

I decided to memorialize Tasha’s experiences with crows in Karma’s a Killer.  Blackie—the crow in the mystery—isn’t Tasha’s friend, but he’s very real.  The characteristics of crows incorporated in the novel are all based on fact.

These beautiful, social, and highly intelligent creatures are vastly underappreciated. I hope in reading my work, you’ll learn to love them as much as Tasha and I do. 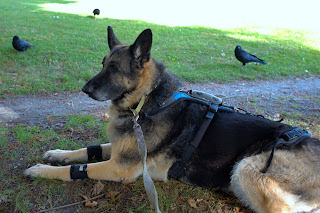 A Downward Dog Mystery Series:
(Click on the book covers for more information or to purchase from Amazon.)

Tracy Weber is the author of the award-winning Downward Dog Mysteries series featuring yoga teacher Kate Davidson and her feisty German shepherd, Bella. Tracy loves sharing her passion for yoga and animals in any form possible. Her first book, Murder Strikes a Pose won the Maxwell Award for Fiction and is a 2015 Agatha award nominee for Best First Novel.

a Rafflecopter giveaway
Follow
Posted by Kim at 5:12 AM