Review ~ THE GOOD, THE BAD, AND THE VAMPIRE by Sara Humphreys 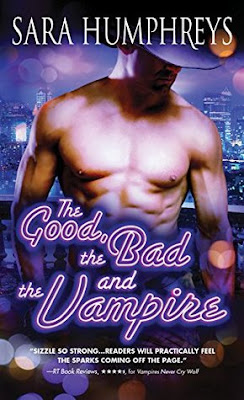 Beloved author Sara Humphreys' acclaimed paranormal romance series continues with sweltering attraction between two vampires who have all the time in the world to satisfy their desires...

He wants eternity?
Dakota Shelton is a vampire cowboy with a penchant for cinnamon lollipops and Johnny Cash. Though highly skilled and deadly dangerous to his enemies, he's still a Texas good ol' boy at heart. And he has that heart set on wooing Trixie LaRoux-the most badass punk rock chick in town-the old-fashioned way.

Over her undead body...
Trixie is tough as nails and sharp as a silver stake-the last thing she wants is a man to sit on a porch and not grow old with. So it'll take going to hell and back fighting a new threat to vampires before she admits Dakota's courtship makes her blood hum. Turns out chivalry's not dead after all.
REVIEW
I have read my fair share of paranormal romances and Sara Humphreys’ The Good, the Bad, and the Vampire was a lot of fun.  The characters were easy to like and I was very intrigued by the way Sara expanded on supernatural lore.  The Good, the Bad, and the Vampire is the second book in this series that I have read and I was equally impressed by my first introduction.  There has to be a myriad of directions that one could take stories related to the supernatural.  I would have argued that supernatural stories have been told so much that they would get old.  Not in this case.  The imagery and personality that these creatures possess is addicting.  I didn’t want to put this book down.  I read it in record time.

The Good, the Bad, and the Vampire is the story of future vampire bloodmates Trixie LaRoux and Dakota Shelton.  Trixie is a vampire that’s also a bartender.  Dakota is a member of the elite vampire police force.  Trixie made a lot of bad decisions in the life that she had prior to being turned into a vampire.  One of those decisions was using drugs.  She has spent most of her vampire life avoiding addiction and meaningful connections to anyone outside of her coven.  Dakota is a true Texas cowboy with a Southern Drawl and Texas charm.  They have know each other for two years and have made every effort to avoid acting on their attraction although everyone else knows that there is a spark.  Gargoyles, gold, and a secret child change everything for both of them. Clearly, they will get their happily ever after but the plot twists regarding other supernatural beings are what make the book so good.  That appears to be the theme in this series.  Someone also has a surprise addition to their DNA.  There is also plenty of other action.  Some of it happens with daggers and the other action happens between the sheets.  Dakota and Trixie light up the night in such a way that it makes a vampire’s heartbeat.

I truly enjoyed this book and will likely go back and read the other books in the series. Note that they are possible to be read as standalones but I have learned more and more about each member of the coven with every book.