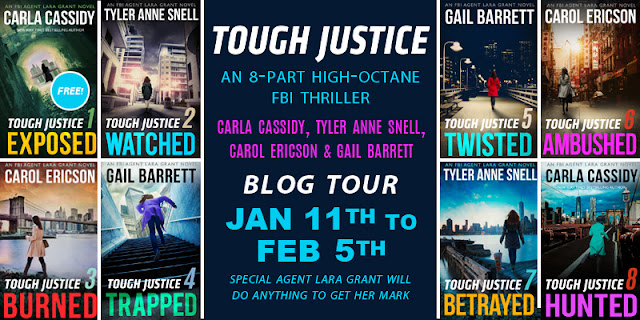 About the Tough Justice Series:

FBI Agent Lara Grant has finally put her life as an undercover operative behind her and started a new assignment in New York City. But her past and present collide and become ever more twisted as a spate of murders send a message that is cruelly, chillingly personal…


Lara Grant is an FBI agent looking for a fresh start, but on her first day in her new role at CMU, she discovers that a deadly adversary from her past is pulling strings and luring her new team into the worst possible trap… But when Lara’s back is against the wall, there’s only one out. With guns blazing!

Special Agent Lara Grant is back in her enemy’s sights, but this time she’s not alone. She has a brand-new team and Lara knows she’ll need to trust them with her life. Starting now.When a lead becomes a victim, Lara and her team are thrown. Lara put Moretti away for life—so how can a guy who is still in prison be pulling strings? There’s only one way to find out. But when Lara comes face-to-face with the monster from her past, will she get answers? Or unleash hell?

Destroying Moretti was Special Agent Lara Grant‘s biggest coup, but she paid a heavy price to make the bust. She’ll do anything to keep him—and her secrets—behind bars. But Lara knows he’s playing the FBI like a maestro even from jail. So when her boss’s daughter is kidnapped, it’s personal…and not just for Lara. With the team at breaking point, it’s up to Lara to keep everyone focused. Until a chilling photo is delivered to her home address. Moretti knows where she lives. And he knows what she’s hiding…

Special Agent Lara Grant‘s team are racing against the clock to prove infamous crime boss Moretti is behind a recent series of murders. With each lead ending up in a body bag, Lara’s trapped by the weight of her own guilt. How many would still be alive if it weren’t for her troubled history with the villain? But he won’t quit, so neither can Lara. The sniper is the key to finding the link between Moretti and the current cases. But before they can reach him, Moretti hits closer to home than Lara could have imagined…

With a sting set for a downtown bar, Special Agent Lara Grant and her team are on high alert to snare the most dangerous man in Manhattan. No one tears their team apart and gets away with it! Their aim: to get the perp’s DNA from his shot glass…Mission accomplished, but each step forward in the case takes them two steps back into Lara’s past—this time, to the years before her undercover assignment, and a family torn apart by a brutal murder. But Lara knows she can focus only on the present. Because when the DNA results come through, they shock the team and rock the very foundations of the case…

With her trusted team all focused on getting justice, Special Agent Lara Grant is relieved to finally see some progress, even if their investigation has now turned to delving into some gruesome events from over twenty years ago. An exhumation is necessary to unravel all the knots of this case, but Lara is surprised by how close their quarry is… In fact, he’s just one step ahead, almost teasing them by how near he is…

Trust has never been easy for Special Agent Lara Grant. Life taught her a hard lesson as a child, one she’s never forgotten. But now, when the betrayal is so close to home, Lara is pushed to the very limit. As the players finally move into position, it’s time to go all in, or go home. It doesn’t matter that fear is shaking her very core, it doesn’t matter that everything she has…her team, her new family…is on the line. What does matter is that there has always been one truth about Lara Grant: when her back’s against the wall, she comes out guns blazing. And at last her target is in her sights…

The worst has happened: her mark is on the run. But Special Agent Lara Grant has no clues. No destination. Just fear for those she loves and bone-deep belief that he’s coming straight for her. But she knows Moretti…just as he knows her. And when the final clue clicks into place, the hunt is on. Lara will do anything it takes to catch this evil man who has caused the deaths of countless innocent people. With emotions on a knife edge, Lara is running on instinct, on the desperation of unconditional love. With adrenaline pumping, this is it for Lara…flight is not an option; all she can do is fight to the end…

You can find out more about the Tough Justice series here.

Head over to Kismet Book Tours to follow the tour and find out more about all the authors who are apart of the Tough Justice series.

A Day in the Writing Life of Romantic Suspense Author Tyler Anne Snell
I've always wanted to write books. Ever since I could write, that's been my ultimate goal. That's never changed.
However, what has changed throughout the years is how I approach it now. During middle school, high school and college, my methods obviously differed from what I do now. I'd write during breaks in class and lectures (okay, sometimes during the actual classes), after homework (sometimes instead of homework), and basically any spare time that inspiration struck me. After college and while freelancing, I changed my ways to staying up way too late to keep writing books and ideas, sucking down sweet tea and listening to music in my headphones, trying not to wake anyone.
Now, after becoming a full time writer, I've found a more comfortable ground. No longer do I have to sneak in time to write or convince myself that staying up until the early morning is the only way to finish a book.
So, here's my day in the life! (Subject to change if coffee runs out.)
My day starts with a very grumpy me being woken up by my husband as he gets ready for work, as per my request. While I love him and appreciate everything he does for us, this is the only time I truly dislike him as a human being. (Did I mention I am not a morning person?) I trudge around the house in an unhappy, barely alive stupor until the coffee finishes and even then I don't feel an infusion of life or happiness until I've had a sip or two.
With coffee in hand I settle down in front of my computer and try my best to not browse Facebook for too long before turning my attention to my emails. Usually if my coffee isn't doing the trick I will skip email land until later. Emails or not, I somehow always manage to get lost in social media land. Hello, my name is Tyler and I'm addicted to social media.
Assuming nothing pressing needs my attention ASAP (those being edits, art fact sheets, or marketing things) I start up my Spotify app. It's a wonderful, free music player that has my plethora of playlists. Some writers can't focus on writing when listening to music. I'm the opposite. I need music just as much as I need coffee. (And that's a whole lot, let me tell you!)
Once I have a playlist going, I finally look at my word documents. Usually I set a daily goal based on my deadlines. 2500 words, finish this chapter, etc. I try to do this, adjusting my music to the mood and part of the story I'm in, until my coffee runs out. That's when things get serious over here. I usually get the second cup the moment I realize I'm empty. From there I usually try to take a break or two, whether it's story boarding an issue or timeline out on my dry erase board next to my desk or calling up my dad so I have an excuse to walk around my back yard, because if I don't take a break I become that grumpy person I was before my coffee. I'll also eat lunch so the same thing doesn't happen. Because what's worse than a tired, coffee-less Tyler? A hungry one.
I'll dive back into writing after my breaks and power through until my husband Tyler (yes, same name) gets off of work. It's my personal, daily goal to finish my writing goal before he gets home so I can step outside of my writing world. However, that's not always the case. Sometimes I'll push through until supper, other times I'll stop and then start when he goes to bed. Those nights often turn into mornings, because sometimes you just can't stop the inspiration train. Most times I don't want to even try.
To some it might sound like a boring day at work, (I often get people who ask how I just write all day) but I just remind everyone that while my location doesn't change, the worlds that I work within do. While I may be in my sweats, down two coffees, and in a silent battle with my cat to get off of my keyboard, my mind is running through the alleys of New York City or fighting a madman in a small town, all while falling in love.
My day in the life may look the same on the outside, but I tell you it's filled with excitement, intrigue, fear, sadness, romance, determination, mystery, and all the trappings of what it means to be human! It's an experience that makes me love writing as much as I did when I was younger!

Tyler Anne Snell writes and reads a little bit of everything but has a soft spot for thrillers, mysteries, and sexual tension. When she isn't writing or reading, she's re-watching her favorite TV series or playing video games. The first book she finished in one sitting was a Harlequin Intrigue. It taught her to appreciate the power of a good book.

Tyler lives in Florida with her same-named husband and their mini lions. Visit her: www.tylerannesnell.com