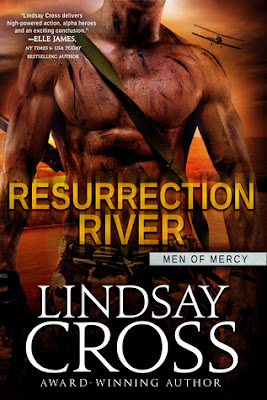 With guilt. Regret. Vengeance. But a forbidden desire keeps pulling him from his mission…

Desire for his best friend’s widow.

A war widow, alone and broke, Rachel struggles to revive her family’s crop dusting service to survive. Now she takes to the skies to find escape. Escape from the pain. From the guilt. From the earth-shattering desire for her husband’s best friend.

Rachel and Ranger can’t fight the attraction between them any longer. But one fateful night cleaves their new found love in two...

Can they find the will to fight for true love? Or will an evil so shocking destroy their lives for good?
REVIEW
Resurrection River was one of the most balanced books that I have read in awhile. It’s just the right amount of romance, sex, and violence.  Ranger James vows to look out for his best friend Shane’s wife, Amy Carter, after Shane is killed in action during a Special Forces mission overseas.  It doesn’t hurt that Ranger is also in love with Amy. Amy makes every attempt to keep Ranger at bay although she has the same feelings for him.  A homegrown threat to Amy and her newborn baby pushes them together and puts them both in mortal danger.  Unfortunately for the bad guys, Ranger has an elite unit of Special Forces brothers at his disposal.

Since Resurrection River is the second book in the Men of Mercy series, there are some details that would be clearer if you read the first book, Redemption River, but most of it is explained.  Besides the sexual chemistry and gunplay, the best part of this book has to do with Amy’s conflict with her mother-in-law, Mavis.  Mavis is a venom spewing, bible thumping bully that uses her position in the church to make everyone else feel small and helpless.  Mavis didn’t feel that Amy was good enough for her deceased son so she takes every opportunity to drag Amy down.  There’s a scene where the tables are turned and some of the other women in town come to Amy’s defense and kick Mavis off of her pedestal.  It’s a beautiful thing.

Resurrection River was a very intense book and I could go into so much more detail but I don’t want to ruin it.  There’s a significant plot twist at the end that make everything worthwhile.  I liked the Redemption River but I felt that this was a major improvement and I hope that the next book continues down this path.

Men of Mercy Series:
(Click the book covers for more information and/or to purchase from Amazon.)