Review ~ JUST GIVE ME A REASON by Rebecca Rogers Maher 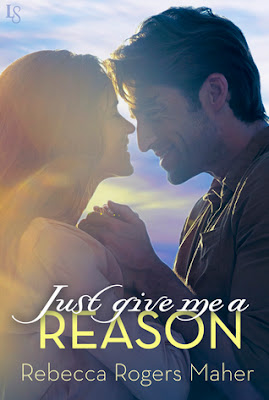 Rebecca Rogers Maher follows up Rolling in the Deep with a sexy and deeply emotional short novel in which unexpected desire leads to surprise beginnings.
Tony Lopez is losing it. Burdened by a broken marriage and a failing business, the divorced father of two young daughters isn’t on his A game when he meets Beth. She’s clearly pregnant and defiantly single: a beautiful, graceful vision that lights a fire somewhere deep beneath Tony’s layers of self-doubt. They connect at his brother’s upstate New York home during a weekend among friends. Except friends don’t feel this kind of chemistry—or want each other so bad it hurts.
Beth Cody has no use for ties that bind. She’s witnessed that kind of wrecking ball. The father of her child isn’t in the picture, and she couldn’t be happier. So when Tony sends her already raging hormones off the chart with his rugged good looks and pent-up sexuality, Beth is thrilled to indulge in a short-term affair, with no strings attached. But one taste isn’t enough. And now that she’s out of her comfort zone, Beth either needs to let go or take a chance on a man who might just be worthy of her love.
REVIEW
Rebecca Rogers Maher is an unconventional author.  She doesn't take the easy way out by writing squeaky clean characters.  They're real people with real life problems (pain, regret, addiction, abuse, etc.).  I love that about her and her stories.
Tony and Beth are characters whose story I really wanted to read.  Readers first met the two in Rolling in the Deep.  Tony Lopez is the older brother of Ray who is dating Holly.  Beth Cody is Holly’s best friend.  Just Give Me a Reason seemingly takes place along side the last couple of chapters of Rolling in the Deep.  But it is a standalone read.  If you have read Ray and Holly’s story you have the opportunity to catch up with them a little.

Tony is a recently divorced father of two little girls.  He shares custody with his former wife.  Though his marriage ended, he still believes in love.  His home furnishing business is struggling and he spends every waking moment trying to figure out how to turn it around.  He refuses to borrow  money from his millionaire brother, Ray.  Beth is pregnant and has decided to parent on her own.  She’s a retail worker who doesn’t believe in marriage or monogamous relationships.  She’s learned from her father that it’s better to be single and carefree.  Upon meeting each other, Beth and Tony have an immediate attraction.  But because of their relationships to Ray and Holly, they don’t want to create any awkward situations.  Things slowly change during a rainstorm and the two realize they have deeper feelings than they know what to do with.

I loved Just Give a Reason because you’re able to see a couple come together in every sense of the word.  Over the course of the book, Tony and Beth go from two people who are attracted to each other on a physical level to two people who need each other on an emotional level.  You get to see Beth mature a little, come to terms with her past, and open herself up to love.  You get to see Tony love like a man who isn’t afraid of getting hurt and be a pillar of strength and devotion when faced with a life-changing event.

No, Just Give Me a Reason isn’t one of those cookie cutter romances.  It’s deep and touching and real.  It shows that everyone deserves happiness and love.

**Received a copy from Loveswept in exchange for an honest unbiased opinion.**

The Lopez Brothers Series:
(Clicking on the book covers will take you to Amazon.)

Rolling in the Deep ~ Review 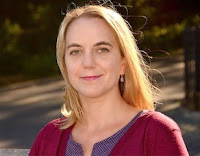 Rebecca Rogers Maher writes realistic stories that push the boundaries of contemporary romance, uniting the genre’s love scenes and happy endings with the crisp, layered prose of literary fiction. In past lives, she’s been a teenage metalhead, a cleaner of lab rat cages, a community organizer and an urban schoolteacher. Her recent work includes Rolling in the Deep and the forthcoming Just Give Me a Reason from Loveswept, as well as The Bridge, Hurricane Lily, Snowbound with a Stranger and an upcoming title with Brain Mill Press.