An interview with Candy Sloan, author of BEST FRIENDS WITH BENEFITS + Giveaway 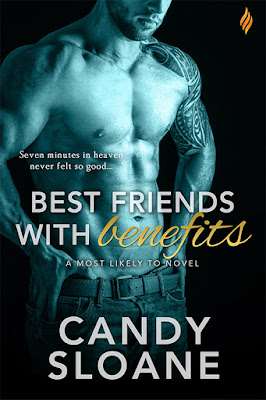 Valerie Barkin and Alec Rogers survived bullies, awful parents, and seriously shitty social standing the only way best friends can—together. But with the unexpected sexual tension suddenly flaring between them, surviving their ten-year high school reunion might be a different story…

Val hasn’t changed. She still feels like the stringy-haired band geek the popular kids teased, but Alec has definitely changed. He’s now the front man for the Grammy-winning rock band Chronic Disharmony, with the sexual reputation to match. And he’s more than willing to help Val rock the reunion.

And then it happens—a drunken game of Seven Minutes in Heaven—and their fourteen-years-long foreplay comes crashing to the forefront…changing everything.

Seven minutes turns into a weekend of mind-blowing, no-strings-attached sex. But these best friends won't be able to leave their hearts out of it forever, not when the most meaningful benefit could change their relationship for good....

Hi Candy. Thanks for joining me.

You normally write YA & NA books. Aside from the sex scenes what was the biggest difference for you, in writing this book?
Having it be about adult issues, career and more serious romantic conflicts. Additionally I like writing comedic scenes and there is one that features Dick Pics that I could have never gotten away with in a YA book. Plus the sex scenes, you really can’t forget the sex scenes!

Alec has definitely changed since school and now the whole world knows him. But what is he really like?
He’s really very sweet and shy and loyal, but he covers it up with bravado and swagger. Valerie is one of the only people who knows his real heart.

Alec sounds like my kind of hero.  Valerie seems to still have the trauma of high school running through her and sees herself as her high school self. But what do you see, when you look at her?
I see a very strong woman who is achieving her goals. She is only stuck in her high school mind set because she is back at her reunion. It makes her remember everything she wanted to leave behind that she can’t, including her feelings about Alec.

What's the real attraction between these two?
Their past: the fact that they each know the truth about each other and love each other anyway. And of course an insatiable chemistry.

What was the one thing you couldn't WAIT to write in the book?
How their friendship grew into more. I think friends to lovers is so fun because you know everything about each other before you fall in love. There are no secrets and nothing to hide. The new things you discover are all shaded in everything you already know.

Oh my gosh.  That’s so true.  I never thought it of that way before.  Best Friends with Benefits is the first book in your Most Likely To series. What can reads expect from this book and the series itself?
Lots of laughs, swoons and seriously sexy times; what (if you’re single) you wish your high school reunion could be like. (winks)

Great.  Thank you for joining me.

He shouldn’t want this. She was his best friend. But he couldn’t stop.

Even in the dark, he could sense her curves. Ample breasts just begging for a skimpy tank top, her ass plump in that tight little skirt and insistent for a strong squeeze, or a smack if she was being naughty.

The way her gaze locked and her breath met the speed of his own as he erased the last bit of space between them, he was sure she was naughty. Very naughty. That she would welcome the palm of his hand.

And just like that, his best friend had made him hard.

“I don’t hear anything in there,” Randy Tines yelled from outside the door.

“I think we’re supposed to be kissing,” Alec said, his cock so rigid he thought she could feel it through his pants.

“You mean each other?”

“We could just make kissing noises,” he suggested, thinking of his lips teasing along the inside of her collar, biting off button after button of her shirt and spitting them out like watermelon seeds.

Hell yeah, he wanted to kiss her, her lips and her neck and the little spot behind her knee that she had been kneading as they drove here. He knew it was crazy, he knew it was wrong, but he wanted to be the guy to fuck Mr. Peanut out of her.

“Like this?” She pressed her hand to her lips and pretended to make out with it, her eyes on him as her tongue slicked over her skin.

His stomach rumbled in pure sexual hunger. One thing was for sure—all that flute practice had been good for a lot more than music.

“That sounds completely fake,” he scoffed. Though considering the way his cock fought against the fabric of his pants, that was not entirely true.

Her bottom lip lay open against the inside of her palm.

“You think you could do better?”

He yanked her hand to his lips before she could protest, before he could consider. He kissed it lightly at first, soft and drugging, slid the tip of his tongue up to her wrist, until he hit the buttoned cuff. “Maybe it should be me.” The words spilled out against the soft-as-sin fabric.

“Maybe I should be the one to fuck you like you deserve.”

Val didn’t reply, just breathed out more peppermint, hot peppermint against the skin of his face. Her eyes smoldered with want. It was clear she felt it, too, the heat between them, the confusing, beautiful, delicious heat.

He grabbed her forearm and drew her closer, slanting in to her chest. The shock of their bodies against each other caused them both to freeze. Not even a breath passed between them, but he knew exactly what he needed to do.

He clenched the back of her head, and his lips dipped to her neck, dripping down her skin like melting ice. Fuck, he had to taste her. He opened his mouth, and his tongue lapped at her tender skin.

“Follow my lead.” He couldn’t stop, though she certainly didn’t seem like she was asking him to. If anything, she was yielding to him. He trailed a finger down the center of her neck, playing with the top button of her shirt, pausing so he could think. Ten years. He could have gone to see her so many times. He hadn’t at first because of how they’d left things after graduation, and then because their careers got in the way and they had both gotten into the routine of being like pen pals, but maybe he had really been avoiding their attraction.

She needed this, and he was going to give it to her.

Candy Sloane is a pseudonym for a Young Adult & New Adult author who needed to write some naughty books her mother couldn’t read. She lives in Portland, OR and loves Lifetime movies. She would tell you more, but this persona is a secret.

a Rafflecopter giveaway
Follow
Posted by Kim at 4:39 AM