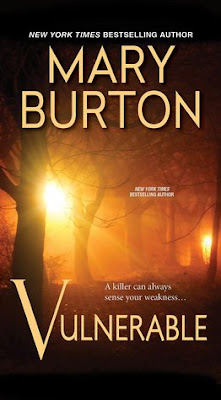 Three went in; one came out. For five years, no trace has been found of two high-school friends who went hiking in the woods near Nashville. The third teen, Amber Ryder, was discovered at the bottom of a ravine with a broken arm, head trauma--and zero memory of the horror that put her there.

What started as a cold case has become a fresh hell for forensic technician Georgia Morgan. Another woman's body is found in the woods, and it leads to the missing teens' remains. But while Georgia works with Amber to try and reawaken her memories, her gut tells her the worst is yet to come.

At A Killer's Mercy

Homicide Detective Jake Bishop can't be sure whether Amber is an expert manipulator or the killer's next target. Either way, he's determined to protect Georgia. Because the deeper she digs into the past, the deadlier the secrets that emerge, and a nightmare years in the making is about to come to a bloody, terrifying end…
REVIEW
Vulnerable is part of the Morgans of Nashville series which involves siblings who work in different departments of Tennessee Law Enforcement.  There are three brothers and one adopted sister, Georgia, who is the youngest.  Georgia Morgan is a Crime Scene Investigator.  Her older brother Deke assigns her a cold homicide case from five years ago and all heck breaks lose.  Georgia is a top notch CSI and she is partnered with a hot-tempered but very good homicide detective named Jake Bishop who comes from Boston.  Together, they are a combustible combination of part-time singer and full-time hard nose cop.

Mary Burton does an amazing job of tossing in just enough shady characters to make it very difficult to figure out who murdered two teens five years ago.  It doesn’t help that their bodies were never found and that there is a third person who doesn’t have any memory of what happened due to a concussion that she suffered at the time.  Throw in some mommy issues, domestic violence, and the classic tale of being from the other side of the tracks and the plot gets rather thick.  As fresh bodies start turning up, the suspect pool increases.  Somehow, Georgia’s cold case starts getting really warm in a hurry.  An unexpected spark between Georgia and Jake makes things even more intriguing.  With the pace of the investigation escalating, it was a race to see if Georgia and Jake would end up between the sheets before or after the investigation comes to a head.  You’ll have to read the book to find out the answer to that but I can assure you that it was fun to watch.

As the killer began to come into the light, I found a lot of hidden clues that I overlooked.  There are a lot of layers you have to be peeled back to understand exactly what happened and why.  Some of the plot twists, you just can’t see coming and that is the hallmark of any good mystery.  I was guessing until the very end. And man, was the ending action-packed.  Vulnerable had everything that I look for in a romantic suspense.  It was well-rounded and I felt like I got to know each of the main characters.  Note, while Vulnerable is the fourth book in the series, it can be read as a stand alone.

**Received a copy from Kensington Books in exchange for an honest unbiased opinion.**

The Morgans of Nashville Series:
(Click on the book covers for more information or to purchase from Amazon.)