Romantic Suspense Review ~ HER SPY TO HAVE by Paula Altenburg 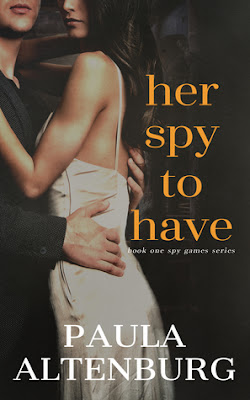 The first in a new contemporary romance intrigue series by multi-published author Paula Altenburg about spies, lies, and the games people play.

The games are about to begin.

Au pair and Canadian ex-pat Isabelle Beausejour has been living abroad for most of her twenty-four years, traveling the world with her irresponsible father. When Isabelle finds herself stranded in Bangkok, with no job, no money, and nowhere to turn, she soon becomes desperate.

Canadian Security Intelligence Service officer Garrett Downing is on the hunt for Canadian military goods that have gone missing. Instead, he finds himself coming to the aid of a young Canadian woman with more resourcefulness than common sense.

Isabelle has no choice but to accept a stranger’s help in getting back home to Canada. Once there, however, as enemies turn into lovers, it soon becomes a game of keeping secrets. Garrett is more than he seems. Isabelle knows more than she’s willing to admit. Will she choose loyalty to her father over the love of a man who tells lies for a living?

REVIEW
While in Bangkok to meet an informant, CSIS officer Garrett Downing posing as an Embassy employee, spots Isabelle Beausejour attempting to sell her Canadian passport.  When he intervenes, he discovers her last name is familiar and wants to know what she knows about Marc Beausejour and if she is in anyway involved in the theft of national defense property.

Confiscating her passport, he sends her back to Canada where he plans to keep an eye on her.  Unbeknownst to him, his brother-in-law, Peter Mansford, a Nova Scotia Member of Parliament hires Isabelle as the summer nanny for his kids.  Garrett and Isabelle meet up again when Garrett pays his family a visit, in hopes of getting more information out of Isabelle.

Confession time......I am a romantic suspense snob.  Her Spy to Have didn’t bring the level of suspense I’m accustomed to in a romantic suspense.  There was no edge of my seat, heart-pounding moments.  The story was nice.  Isabelle is definitely more than she seems to be, which only adds to Garrett’s curiosity.  I found myself trying to figure out what games were being played and by who.  There was a little surprise where your heart does end up going out to a character.

I definitely want to see where Paula takes this series next.  I would loved to have had at least one of the characters from the next book introduced in this one.

Purchase Her Spy to Have from:
Amazon US | Amazon CA | Amazon UK | Barnes & Noble | iTunes | Kobo | Add to Goodreads