Spotlight & Giveaway ~ WHO INVITED THE GHOST TO DINNER by Teresa Watson 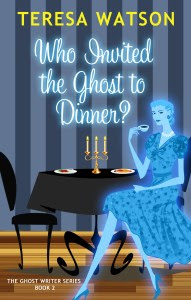 Cam Shaw is hoping that her life will be ghost-free from now on. But that hope dies with the appearance of Mac “the Faker” Green, a wise-cracking ghost from Vegas who has followed her grandmother home. And during the opening night of Blithe Spirit, someone has sent Susan Ingram to her ghostly afterlife. What does her death have to do with the death of her mother-in-law fifty years ago? Who is trying to wipe out the Ingram family one person at a time? And when will that Vegas ghost stop sticking his nose into Cam’s business?

The buffet style worked well. I noticed people chatting with each other as they went through the line. I forgot about Joey Ingram and Stephen Showalter. It was nice to sit down with my family and friends without any interruptions. Mike had assured me that all of the evening patrols were covered, and the dispatcher knew not to contact him unless someone died. He had his phone with him, but it was on silent, lying face down on the table.

I saw Richard go over and introduce himself to Stephen, who smiled and nodded at whatever Richard was saying to him. They talked for a few minutes before Richard rushed off to get ready for the opening act.

The waiters cleared away the dinner plates, and served coffee and other refreshments to their guests. As they hurried off, the lights flashed three times, then dimmed. Everyone turned their chairs and attention to the stage. I had to admit that I was extremely nervous about Rachel and Diane. But I was hoping that they would be professionals, and give the performance of their lives for their audience.

The first act went off without a hitch. The woman playing Madame Arcati was from the Dallas troupe, and she was fantastic. The three leads did a wonderful job, and there was no evidence of the tension that had been present during the dress rehearsal. Maybe it was true what they said: A bad dress rehearsal meant a great show.

The curtain dropped on Act I, and the house lights came up. People wandered over to the dessert tables, while the wait staff went from table to table refilling drinks. Several people came over to Mother, congratulating her on a job well done. Mother seemed a bit overwhelmed by all the attention, but I was happy for her, and I could tell Dad was, too.

The lights dimmed, and the curtain rose on the second act. When Diane (as the character Ruth) walked behind the couch, she suddenly stopped. She appeared to be looking at something on the floor. Just as she started screaming, I noticed a pair of feet wearing red heels sticking out.

Mike jumped from his seat and rushed onto the stage. I was right behind him. He grabbed Diane by the arms and gently pushed her toward me. She was shaking like a leaf, and I wrapped my left arm around her waist to steady her. While I did that, Mike knelt down on one knee beside the person on the floor. I couldn’t tell who it was at first, because he was blocking my view. He checked for a pulse, then turned to look at me and shook his head. That’s when I saw who it was.

Susan Ingram had managed to find a way to ruin Mother’s night after all, but not in the way she had probably planned.

Ding, dong, the witch is dead.


Purchase Who Invited the Ghost to Dinner from:
Amazon | Goodreads

The Ghost Writer Mystery Series:
(Click on the book covers to be taken to Amazon.)

I’m the daughter of a semi-retired Methodist minister, and have spent most of my life living in Texas and New Mexico (no, I am not a native Texan; I was born in the state of Washington). I graduated from West Texas A&M University with a bachelor’s degree in 2000. I taught school for a couple of years before realizing that I really wanted to spend my time writing.

Currently, I live in North Texas with my husband (still getting used to being an empty nester!). I love sports, and spend my free time harassing my husband about his Cowboys losing to my Redskins (and Steelers). Who Invited the Ghost to Dinner?

is my tenth book (second book for the Ghostwriter series). I also write the Lizzie Crenshaw Mysteries (next book for this series is Death Drives a Zamboni).


You can follow Who Invited the Ghost to Dinner Blog Tour here.