THE SUTHERLANDS: ONE FAMILY SAGA (Review of WRECKED by Terri Osburn, BRAZEN by Avery Flynn, STRIPPED by Abby Niles, NOT THE MARRYING KIND by Julie Particka, ONE FORBIDDEN VIRGIN by Joya Ryan and SWEET SURRENDER by Naima Simone) 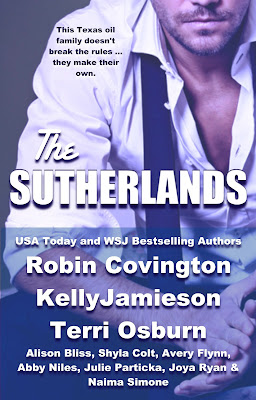 Meet the Sutherlands, a Texas oil family that doesn’t break the rules…they make their own. This box set of sizzling hot, never before published full-length novels and novellas about the Sutherland family features alpha heroes and kickass heroines that are sure to melt your e-reader and help you find your next book boyfriend.

During release week, you can get this boxed set for only $0.99!

Plus 20% of the royalties go to the Reach Out and Read charity.  Get your copy today for the special release week price of $0.99, before the price jumps to $5.99! This anthology is only be available until April 15, 2016!

Inside The Sutherlands you’ll find:

REVIEW
When I saw this anthology and the list of authors associated with it, I was amazed. I love that each author has brought a different type of story to this anthology.  I’ve read 5 of the 10 stories, with the hopes of going back and reading the remaining ones.

Watching his parents both work their fingers to the bone and barely scrape by was hard enough.  Hearing his mother’s deathbed confession was rage evoking.  His father wasn’t his father and the man who was, turned his back on them.  Adam Logan is a self-made man, despite his millionaire birth father turning his back on him and his mother.  It might have taken him a couple of years to put his revenge plan in motion, however, it is now shaping up just fine.

Lexi Hanson is the Development Coordinator for Sutherland Properties Nashville. Her job is to secure a property location for Hudson Sutherland to build a high-rise hotel.  In her heart of hearts, she knows she only has the position due to her father’s friendship with “Uncle Hudson”.  At least for now, she’s where she wants to be. Unfortunately, that isn’t saying much when the project has yet to get off the ground.

Posing as a property consultant, Adam plans to wreak havoc and destroy any plans Hudson Sutherland has to get his dream business venture off the ground.  He just wasn’t prepared for Lexi who looks like the girl next door to speak to his softer side and make him want to be a better man.

In Wrecked, Terri Osburn has provided likeable and unlikeable characters.  Even though Adam comes into Lexi’s life under false pretenses, I liked him from the start.  She, on the other hand took a little time to warm up to.  Terri has managed to throw in a little surprise twist that will leave you smiling.  While Wrecked isn’t as hot as the other books in the anthology, Terri has continued her amazing writing style by giving you a story you can lose yourself in.

Readers were first introduced to Bianca Sutherland and Taz Hazard in Bullet Proof, which is part of the MacKenzie Family Novella series.  In Brazen, the action picks up where I’m presuming Bullet Proof ended.  The best part is if you haven’t read Bullet Proof you can still follow along.

Bianca and her girlfriends who make up the B-Squad are on the hunt for a drug kingpin who has kidnapped one of their best friends.  Gidget’s kidnapping also ties into the DEA’s search for a powerful hallucinogen known as Genie’s Wish.  With the help of her new boyfriend, Taz, a retired boxer and his Romany brothers in arms the group travels the country in search of both.

Bianca and Taz each had less than desirable childhoods growing up, but for different reasons.  They’ve been together for six months and are already living together, but they don’t really know each other.  Their relationship is one of intense passion without a lot of verbal communication.  Their latest mission will put their lives on the line as well as their hearts.

It’s been awhile since I’ve read an Avery Flynn book.  I forgot how she manages to slowly ramp up the action until you’ve lost yourself to the book and nothing else matters.  Prepare yourself for a story of friendship, passion, a little suspense, and surprises.

Abby Niles doesn't quite bring the heat with Stripped, but what she does bring is a story with likeable characters and a journey that’s fun to watch.

Jaxon Sutherland is living up to his family’s reputation.  He likes to sit in his ivory tower and look down on the minions.  He’s a guy who has a coffeemaker in his office but prefers to call his secretary in to make him a cup.

Madison Walker needs her job at Sutherland Industries for the benefits.  She can’t continue to afford to pay for her daughter’s medical care outright.  She’s only been working for Jaxon for a month and she has had enough of his arrogant jerk attitude. When Jaxon unknowingly insults Madison, she throws down a challenge he can’t back down from.

Jaxon and Madison are two characters who unknowingly actually need each other. “Maybe they both had something to learn from each other.” Madison allows Jaxon to embrace the simpler things life has to offer and allows him to have a normal life without all the trapping of wealth.  Jaxon for his part is there to lighten the burdens Madison’s been carrying, simply by just being there, no money needed.

“Kids, the struggles you face, never even crossed my mind.” He paused. “Madison, I’m awed by you.”

I loved the strength, determination, and stubbornness Madison has.  She knows her situation is bad, but she’s trying her best.  She becomes so busy taking care of others that she never takes care of herself.  Jaxon finally meets his match with Madison, she gives him everything he never knew he wanted and only wants him for him, not his name or fortune.

This is a happy for now story, which I can only imagine lasts forever.

Not the Marrying Kind marks my first time reading a book by Julie Particka.  I have definitely found a new author to read.  I seriously loved this story and the characters.

Desiree Sutherland-Colt is twenty-two-years-old and has never actually lived her life or done the things she’s wanted to do.  Her parents expect her to tow the line and live the “society girl” life she’s supposed to live.  After an argument with her parents because she has broken off an engagement to a man she didn’t love, one picked by them, she decides to leave and found out who she really is.  Gunner Norton has his demons.  He’s a quiet soul whose exterior doesn’t jive with who he truly is.

Fate has brought these two together.  But a fake engagement and real feelings are going to determine their future.  Desiree has started to think she’s “not the marrying kind”, but Gunner’s love is going to have her questioning everything about her life, hopes, dreams and future.

Prepare to fall in love with two polar opposites who are just right for each other.

Sadly, One Forbidden Virgin was a DNF (did not finish) story for me.  I found the concept to be way too similar to Rules of Seduction, which Joya released last year. In One Forbidden Virgin, Summer Villar has been told too many times that there’s something wrong with her.  She’s dated guys but hasn’t slept with any of them.  She and her best friend Maggie Sutherland make a surprise visit to Maggie’s brother Jace’s exclusive club in Manhattan to see if Jace can help Summer.  The club caters to a certain clientele, one who’s interested in voyeurism, BDSM and more.

The story had a been there, read it type of feel to me and I found myself disappointed that Joya didn’t come up with something better for the anthology.

Naima Simone’s Sweet Surrender is a second chance love story.  Five years ago, Griffin Sutherland left a heartbroken Hayden Reynolds in his wake, as he hightailed it out of Houston and away from his controlling, snake in the grass father for Florida and parts unknown.

A summons from his father and a promise to a little girl brings these two back together again, only to discover that sparks and passion still exist and burn hotter than ever.

Griffin Sutherland is my new book boyfriend!  I am now a fangirl of the full beard and the man bun.  Griffin is a dirty dirty talker, with the mad skills to back up his words.  He’s honorable, compassionate, tender, and loyal.  He’s his own self-made man.  Hayden is a survivor.  She’s determined to make something out of her life and is driven to succeed.  Her one kryptonite is Griffin and she’s about to find out that “Love is sacrifice, trust, commitment. Forever.”