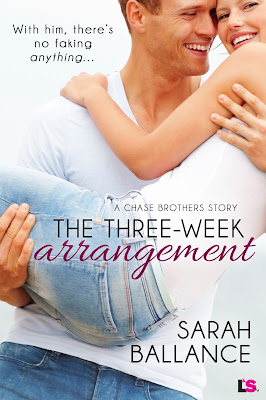 Ethan Chase isn’t interested in dating. After losing the woman he loved more than life itself, he’d much rather ride solo, but his family is dead set on fixing him up. To get them off his back, he hooks up with ultra-adventurous, ultra-temporary adventure photographer, Rue Campbell. All he has to do is survive three weeks in her orbit and he’ll be single again, only without the pitying looks and pressure to move on.

Rue is literally counting the days until her plane leaves New York City. The last thing she wants is a relationship, but being Ethan’s pretend girlfriend can’t hurt, right? Wrong. With Ethan, there’s no faking anything—in or out of the bedroom. With the sheets burning hot and the clock ticking on their arrangement, Rue realizes she’s falling for a man guaranteed to derail her goals…and break her heart.

Rue's brow furrowed. “This isn’t easy for you, is it?”

Against all odds, the knot in Ethan's chest loosened. “No. But it shouldn’t be this hard. Especially considering this isn’t personal.”

She blinked. “I saw you in your underwear. It’s personal.”

He cringed. “I need a do-over on that moment. And that’s not what I meant.” He withdrew one of his business cards from his wallet, which had fortunately been sheltered from the brunt of the spray that afternoon, and handed it to her. “I’ll run interference with Boyd, and I won’t sell your underwear. You try to keep a straight face when I introduce you to my family as my girlfriend, and don’t hold whatever my brothers say against me.”

She studied the card for a moment. When she looked up, her expression was serious. “Are you going to freak out next time I touch you?”

“I freaked out?” Hell yes, he had, though he’d merely frozen. She couldn’t know that his arm still tingled—even more so now that she’d actually said she was going to touch him again. He hadn’t expected that, but he should have. There was no way they’d pull off dating if he avoided physical contact.

“You sure you want to do this?”

The question had him thinking she could read him a little too well for his own good, but it wasn’t a stretch to think he’d have trouble with this step. If it was easy, he wouldn’t be negotiating with her.

“Yeah,” he said. “I’m sure.” The words hurt to utter, but he’d get over it. He couldn’t begin to explain what seeing his parents’ joy had done for him. But he wouldn’t have to, because if Rue wanted to keep Boyd Von Whatever out of her hair, she needed him as much as he needed her. Once his family realized he was capable of moving on, they’d back off and let him do things his way, and with Rue leaving the city in just three weeks, he had the perfect out to this non-relationship. “I’m sure if you’re sure.”

“I think I can handle hanging out with you if it means getting Boyd off my back.”

“Oh, I didn’t say that.” Her gaze, intentionally or otherwise, took a slow tour south and lingered before she remembered where his face was. “It’ll be torture all right,” she said, blue eyes dancing. “The very best kind of torture, but if it means you’ll take me to the gala, you’re on.”

“Then it’s a date.” The words were harder than Ethan expected. He forced a smile as he let himself out of her house, but it fell as soon as the door shut behind him. He stared down the street, in the direction his life had once been and couldn’t help but wonder.

What the hell had he done?

Hi Sarah, welcome to Read Your Writes Book Reviews.  How are you?
So glad to be here! And when you guys kick me out, I’m desperately seeking a nap. (Not because I don’t find you all fascinating company, but because I haven’t slept in days.)

That sucks!!!  I’ll try to make this quick.  Tell me about the Chase brothers.  How many are there?  What do they do?  What are they like?
There are four of them, and together they own a New York City-based HVAC company. (Yeah, I know, it’s not a very “heroic” profession, but this entire series was an accident and that was part of the fallout, lol.) As a group, they’re wide open. They don’t miss a moment to take a jab, which can make for some pretty funny stuff. Individually, they’re pretty distinct. Crosby (Five Things I Love About You) is the oldest and the most responsible. Sawyer (For Seven Nights Only) is the playboy of the group, and probably the least serious. Ethan (The Three-Week Arrangement) is the thoughtful one, and after losing his wife at a young age, he’s got a perspective the rest of them don’t. Liam (coming in September) is the youngest and the prankster of the group.

The Three-Week Arrangement is the third book in the series.  What can readers expect from it?
First and foremost, readers can tackle these Chase men in any order they’d like, because all the books work as stand-alones. That said, boy was Ethan tough. Writing his story and giving him an HEA without taking anything from the incredible love he shared with his wife was challenging enough. Doing that for a romantic comedy series? Pretty much NOT the easiest thing ever. The result is a lot of heartwarming, funny moments that I hope will leave readers cheering for these two to hold onto this brand new, scary thing they have.

Tell me what you love about Ethan Chase and Rue Campbell.
Ethan is one of those guys who loves with his whole heart, but after such a huge loss, that leaves him especially vulnerable. Rue’s passion as a conservation photographer takes her all over the world. She doesn’t want to be tied down, and he’s terrified of another goodbye. On paper, these two are the least compatible people ever, but then, moment by moment, you begin to see how right they are. More than any other book I’ve written, these characters came together in a way that made them better together than they were apart.

I love that!  What are some fun facts about The Three-Week Arrangement?
Ethan was never meant to have his own book.

Wait. What?
The first book in the series, Five Things I Love About You, was supposed to kick off another series entirely, but after meeting the Chase brothers, the editorial director gave them a series. Which is how I ended up with a widower who was still in love with his wife getting a book on a romantic comedy imprint. (You can’t make this stuff up.)

That’s really interesting.  I am ALWAYS beyond amazed of the fact that you homeschool I believe six kids and seem to put out books every few of months.  How do you do it?
Apparently I’m pretty good at getting things done at the nth hour. Seriously, 97% of my life is putting out fires. The only thing I make sure I don’t entirely suck at is the school stuff, but we won’t talk about the stack of papers I have to grade right now. That said, I honestly think it’s easier than what “normal” people deal with. We don’t have to get up at a certain time. We don’t have to work around anyone else’s schedule. And schooling gives me one-on-one time (most of it fun) with each of my kids on a near-daily basis, so I don’t suffer from the mommy guilt that hits a lot of families. On top of that, we spend a lot of time hiking or doing other activities together, and as a result we’re a low-stress, close-knit group. And at the end of the day, when I’ve hit my limit of that low-stress, close-knit group (see what I did there? LOL), I go hide in my cave and write. When every day is “family day” there’s pretty much no guilt in that. (smile)

As I said, AMAZED!  What do you do to stay sane?
Hahahahaha! Sane! OH MY GOSH MY FACE HURTS FROM LAUGHING. How’s “less crazy” hit you? I can do that one, and in fact I do have a go-to stress buster I adore. Well, two. One is budgeting. I have an epic spreadsheet to track all things financial, and I pore over it at every given (and stolen) chance. Numbers make me so happy. I can actually feel stress leave my body when I look at numbers. (See how I babble with joy?) My other go-to is trip planning. We’re doing this thing with the kids where we’re taking them to all 48 contiguous states, which means I get to plan routes and shopping lists and find RV parks and stuff. Plotting to put my kids on top of a volcano. Yeah, that’s good stuff.

Oh my gosh.  I’m a spreadsheet girl too!  Hitting all the 48 contiguous states sounds really fun.  I would love to do that one day.  What’s next for you, writing wise?
I’m finishing up Liam’s Chase book for September release, then starting the second book in a new 3-book Indulgence series that will kick off in July.

You are always busy.  Thank you so much for joining me today.  Congratulations on your new release.
Thank YOU for having me and for showcasing Ethan and Rue. (smile) And those of you who are still with me at the end, I have a treat for you. You can find out which Chase brother is your perfect book boyfriend by taking this quiz. Seriously, there are NO losers! http://www.buzzfeed.com/debbies69/which-chase-brother-is-your-perfect-book-boyfriend-m2et

The Chase Brothers Series:
(For more information or to purchase from Amazon, click on the book covers.)


You can follow The Three Week Arrangement Blog Tour here.

a Rafflecopter giveaway
Follow
Posted by Kim at 4:45 AM