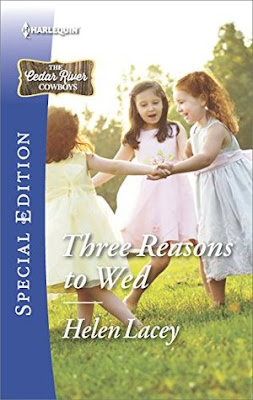 Why Daddy Should Marry — by Breanna, Milly and Tina

2. He looks cute when he plays dress-up with us.

In Cedar River, Grady Parker’s a ‘catch’. But on his ranch, he’s just ‘Daddy’. His three little daughters are all the females he needs…until Marissa Ellis moves in next door. He and his late wife’s best friend never agree on anything — but attraction!

Marissa fulfills her promise to love her goddaughters, but their sexy cowboy daddy is off-limits. She can’t — won’t — step into her best friend’s shoes and husband’s bed, no matter how tempting he is, or how cozy his family. But three darling little girls can be awfully persuasive…

REVIEW
It’s been two years since Liz Parker’s death.  Her husband Grady and her best friend, Marissa Ellis, are still trying to come to terms with their loss.  During this time, Grady has had no choice but to keep moving on as best as he can and raise his three little girls on his own, with the occasional help from his mother.  Marissa, still grieving, has been trying to get her own life together, following her divorce.

Realizing her ex, who was also her boss, has blackballed her and she isn’t able to find work, Marissa moves back to her hometown.  She promised Liz she would love her kids and be there for them.  But Marissa is finding it a little hard when she and Grady never seem to see eye to eye.  To make matters worse, she’s starting to have feelings for the man again.  Grady isn’t too happy with Marissa moving back to town, especially since she’s living at the farm next door.  She was his wife’s best friend, the godmother of his kids and the infuriating woman who has finally gotten his blood pumping again, after all this time.

Three Reasons to Wed brings five people together after tragic circumstances.  Each needing a family they’ve long for or lost.  But there’s more to this story than romance.  This is a story of letting go, moving on, and finding love where you least expect it.  Decade long secrets are about to be revealed, some that will impact the future.  Helen Lacey’s story is sweet, with three little girls looking for a new mommy, a man who wouldn’t know romance if it slapped him in the face, a woman who is torn by the past actions of others, and a mother who refuses to take no for an answer.  I loved the secondary characters in this book and I’m looking forward to their stories being told.

**Received a copy from the author in exchange for an honest and unbiased opinion.**

The Cedar River Cowboys Series:
(Clicking on the book cover will take you to Amazon.)