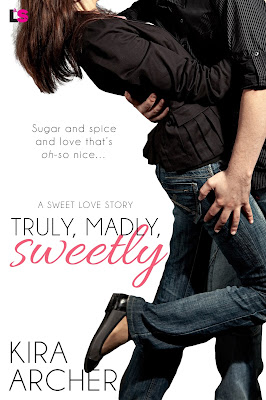 An inherited parking spot. That’s all it took to make Natalie Moran’s food truck dreams come true. But her dream space is attached to a bakery inherited by someone else—drop dead gorgeous Eric Schneider, a financial consultant who wouldn’t know a cupcake from a cannoli. And he wants to buy Nat out, no matter what she has to say about it.

Eric’s determined to build his own business, but he needs the super cute klutz with the cupcake truck to help. If Nat will teach him the basics of running a bakery, he’ll give her free kitchen time. Except…neither expects the heat burning between them or the possibility that their arrangement might become permanent.

When it all blows up, Nat is convinced his actions mean betrayal. It’s up to Eric to regain her trust and show her he’s a man who is truly, madly in love with her, before she disappears from his life forever.

Nat leaned back against the counter, her arms folded, a smile already on her face. “Five…four…three…two…one…”

She broke into a full-toothed grin and poked her head out of the kitchen. Eric was standing, holding the pint of gelato away from him like it was a snake about to strike. A large blob of the stuff lay on the floor at his feet with more of it dribbling down his chin.

He looked at her, his mouth hanging open. “What the hell did you do?”

She blinked innocently. “Oh nothing. I just thought you should have something extra special to celebrate with so I went to that garlic bistro and picked up a pint. I paid a bit more to have a little extra flavor mixed in. It was a little more expensive, of course, but nothing is too good for you,” she said, batting her eyelashes at him.

He wiped a hand across his mouth. “And exactly what flavor is this?”

“Oh, you are so going to pay!” Eric dropped the ice cream and lunged for her.

Nat shrieked and ran laughing into the kitchen but Eric was hot on her heels. There really wasn’t anywhere to run. He had her pinned against the sink in under ten seconds. He scooped a bit of the ice cream off his shirt.

She shrieked again and tried to dodge his hands, though it was hard to keep her mouth closed when she was laughing so hard she could barely breathe. He managed to get a little in and she immediately spit it back out.

“Ha! Serves you right, defiling my gelato like that.”

“It’s better than putting vegetable oil in my glass cleaning solution! That was just mean. I still can’t get the streaks off that mirror in the bathroom.”

Eric chuckled and held on tighter when she squirmed to get away. “Okay, okay. I call a truce.”

Nat stopped squirming. “You mean it?”

“I mean it. I’ll stop messing with everything around the kitchen, if you promise you will never, ever touch my gelato.”

She laughed and nodded. “Okay, fine, I agree.”

“Good,” Eric said. But he still didn’t let her go.

They were breathing hard from their mock battle and both of them suddenly realized they were molded together, from hip to chest, their arms locked around each other, their chests heaving in unison with every ragged breath they took.

Eric’s gaze met hers and he leaned in, slow enough that she could pull away if she wanted. She should. The smart thing to do would be to push him away. But since when did her body ever listen to what was smart when it came to Eric?

Squeal!!!  Eric is giving men everywhere a little advice on ways to win the woman you love.

Dear Clueless Dudes Everywhere,
Okay guys, here’s the thing. I think we tend to screw up more than we’d like to think we do. And even if we are totally right (it does happen every now and then), chances are pretty good that she’s at least partially right too.
So…how do you get your girl back? Any way you can.
How did I do it? I focused on what she loves. What is it that she really wants? And what can you do to help her get it? I know compromising sometimes feels like giving in, but you know, it means everyone wins. And more importantly, it means you might get another chance to actually be happy with the woman you love. That’s more important than winning some ego contest.
In my case, Nat wanted her own bakery. It had always been her dream. And it couldn’t have been easy for her to see me swoop in and get what she’d always wanted (though the parking area she inherited was a huge bonus for her). To her credit, she stepped up and helped me get things going. She didn’t have to, and really I wouldn’t have blamed her if she hadn’t. Yeah, I made the deal a little sweeter for her, letting her use the kitchen for her mobile cupcake business. But the fact remains, she spent a lot of time teaching me to run the business she always wanted to run. That she deserved to run.
So, while her accusations against me weren’t exactly fair, after I cooled off, I could at least see where she was coming from. And as hard as it was to admit, she was totally justified in being angry. I wanted to make things right. And you know, giving her what she wanted got me what I wanted most in the end.
Now, I’m not saying totally give in and be a total pushover. But there’s nothing wrong with a good compromise. I didn’t give up my new business. That wouldn’t have made me happy and would have become a problem of its own down the line. But that compromise is key. Give a little to get a lot. I compromised. I did what I could to make things right, make her dreams come true without giving up my own. And together, we might just create a dream better than anything I ever thought possible.
Bottom line, if you love your woman and you want her to be happy, do what you can to make it happen. Be her partner, her support. Bend a little…it won’t break you. As long as she’s willing to do the same. And if she loves you, she is probably doing some compromising of her own. Meet in the middle and you can both be happy. Together.
Sincerely,
Eric Schneider 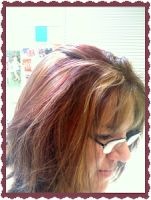 Kira Archer resides in Pennsylvania with her husband, two kiddos, and far too many animals in the house. She tends to laugh at inappropriate moments, break all the rules she gives her kids (but only when they aren't looking), and would rather be reading a book than doing almost anything else. She has odd, eclectic tastes in just about everything and often lets her imagination run away with her. She loves her romances a little playful, a lot sexy, and always with a happily ever after.

You can follow the Truly, Madly, Sweetly Blog Tour here.