Giveaway ~ MRS. MALORY AND DEATH IS A WORD by Hazel Holt 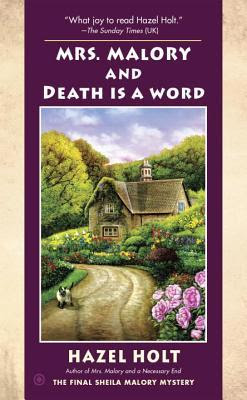 Arson and murder in the English countryside from the author of Mrs. Malory and a Necessary End . . .
In the wake of a reporter’s death, biographer Sheila Malory must dig through the remnants of his life to discover the devil in the details . . .
Sheila’s friend, larger-than-life Eva Jackson, has returned to the village of Taviscombe after losing her husband, Alan. A foreign correspondent, Alan reported on dangerous stories around the world from Libya to Afghanistan—but the cause of his death was more mundane: kidney failure in a London hospital. Still, he led a storied life, and much of his past lies in his writings, papers, and books now boxed away in Eva’s garage.
After Eva decides to compile a book of Alan’s unpublished works, a fire mysteriously breaks out in the garage. Then Eva meets a suspicious end, leading Sheila to wonder if there’s a killer at large in their charming Devon countryside . . .

Purchase Mrs. Malory and Death is a Word from:
Amazon | Barnes & Noble | Goodreads