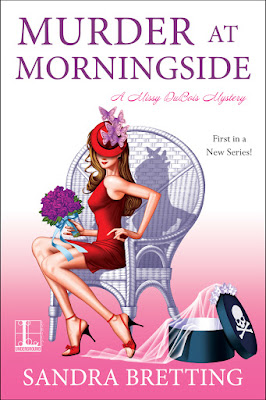 Heads turn when milliner Missy Dubois waltzes into town to set up shop on the Great River Road in Louisiana. Heaven only knows the brides who get married in the grand old mansions there could use a bit of help.

But then Missy discovers a murder among the magnolias, and even the worst “bridezilla” seems suddenly tame.

Time rewound with each footfall as I began to climb the grand outer staircase at Morningside Plantation. The limestone steps, burdened with the history of five generations, heaved their way toward heaven.

At the top lay a wide-plank verandah supported by columns painted pure white, like the clouds. By the time I took a third step, the digital camera in my right hand began to dissolve into the sterling silver handle of a ladies parasol. The visitors’ guide in my left hand magically transformed into a ballroom dance card bound by a satin cord.

Another step and the Mississippi River came into view as it flowed to the Gulf, languid as a waltz and the color of sweet tea. Could that be a whistle from a steamboat ferrying passengers past the plantation? If so, a turn and a wave wouldn’t be out of the question once I reached the top of the stairs, and good manners would dictate it.

I was about to do that when I realized the whistle was only my friend’s cell and not a Mississippi riverboat. “Ambrose! Turn that thing off. Honestly.”

“Sorry.” He shrugged. “I always forget you were Scarlett O’Hara in a past life.”

The mood was broken, though, and the sterling silver in my hand returned to plastic while the linen dance card hardened to a glossy brochure.

They say an ounce of prevention is worth a pound of cure.

Let me tell you, there’s no cure for a wedding once it’s gone off the rails, so I always bring along a pound of prevention, too.

I’m Missy DuBois, and I own a millenary studio right here on the Great River Road in Louisiana. That’s a stretch of land which curves along the Mississippi River and holds a dozen or so Southern mansions that predate the Civil War.

Folks have renovated these gems and turned them into bed & breakfasts, fancy hotels and even a private residence or two. No wonder girls flock down here every summer to get married on lush emerald lawns so green they put Churchill Downs to shame.

My job is to make sure these brides have the perfect veil or hat for their fancy nuptials. That’s not to say everything goes smoothly one hundred percent of the time. Sometimes there’s a glitch that requires a touch of creativity and a dash of knowhow.

Take the time MaryKate Boudreaux’s veil got stuck on a pew when she walked down the aisle. The florist had attached a bouquet to it with double-sided tape, which snagged a bit of netting and left a big tear. I don’t always attend my client’s weddings, but I happened to be sitting four rows over and saw the whole thing transpire. Afterward, I met MaryKate in the ladies room at the reception and dabbed some clear fingernail polish onto the rip. Viola! The rip disappeared and the photos turned out lovely.

Another time the fix was a little more complicated. It happened when Piper Lee’s mama tried to iron out a wrinkle in the veil right before the ceremony. Yep…it left a two-inch burn mark, smackdab in the front. Piper was fit to be tied, until I rushed to the scene with my fix-it kit and whipped out a peel-and-stick sheet that fuses fabric together. I glued a fold in the veil on both sides of her face, which hid the mark and left no one the wiser.

Most wedding mishaps can be fixed with a well-stocked sewing kit, I’ve found. It also helps to have a sense of humor. If all else fails, take a little extra time and remedy the situation using whatever you have on hand. As we say here in the South, “It’s better to arrive late than ugly.”

Sandra Bretting works as a freelance feature writer under contract to the Houston Chronicle. She received a journalism degree from the University of Missouri School of Journalism and wrote for other publications (including the Los Angeles Times and Orange Coast Magazine) before moving to Texas.
Her Missy DuBois Mysteries series debuts from Kensington/Lyrical Underground in May 2016. Bretting’s previous mysteries include Unholy Lies (2012) and Bless the Dying (2014).