I hope you have been following Entangled’s 7 nights of laughter where bloggers are highlighting the queen of laughter, Tawna Fenske, her laugh out loud until your stomach hurts books, a special sale and giveaway! So kick back, relax and get ready to fill your ereader with books guaranteed to liven up your reading time.

Pick up Protector for Hire for the limited time steal of just $1.99! 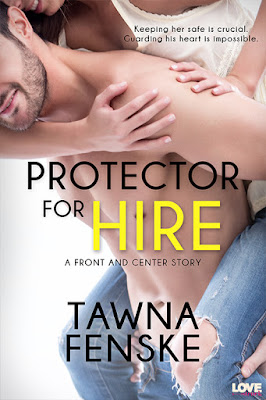 Haunted by his time in Iraq, former soldier Schwartz Patton goes off the grid, retreating deep into Montana’s untamed wilderness. Now, ten years into his self-imposed solitude, his brother tracks him down and asks for a favor. A woman is in danger, and she needs help...and Schwartz is the only one who can protect her.
Designer-loving city girls like Janelle Keebler don't belong in the wilderness. Unless, of course, they're witnesses to a murder by their psycho drug-trafficking ex-husbands. Still, Janelle can't help the immediate physical response she has to her sexy-as-sin protector that leaves her wanting more than she could have ever imagined. Even if he does make terrible coffee...
Every word, every touch, every kiss ignites a need Schwartz thought he’d lost forever. He can't stop the desperate attraction simmering between him and Janelle, even if he wanted to. Even if it means it could get them both killed.

“You’re just in time,” she said in a voice that sounded brittle and cheerful. “Food’s nice and hot. I’m starving!”

She gave him a smile that seemed a little too wide, then speared a piece of meat loaf with enough force to kill it if it weren’t already dead. Schwartz hesitated a moment, not sure what was going on here, but pretty sure he’d done something wrong.

Had she really told him she loved him? Surely it was part of the act. Were they still playing the love-struck incestuous cousins, or was something else happening here?

“You were gone a long time,” she said. “Did you have trouble finding something?”

He frowned, not wanting to admit he’d been pacing around the damn store avoiding the inevitable moment he’d have to go back and face her and accept the fact that he’d probably never touch her again. “Not everything,” he said, poking the meat loaf with his fork but not taking a bite. “I got the milk.”

“No cond—coffee filters?”  “They were all out of cond—coffee filters.”  “All out?” She frowned. “I swear I saw a box when we were there the other day. They were right up by the register.” He shifted on the bench, not wanting to admit he’d stared at the same damn box and thought about having her again. Maybe just one more time before she walked out of his life forever. Instead, he’d forced himself to walk away. “The box was damaged. Can’t risk having holes in coffee filters.” Across the table, Gordy wiped his chin with a napkin. “You like the kind with the pointy tip, or the big wide ones?”

Laverne beamed. “Oooh, I like the new ones they’re making now with the flavor-enhancing micro-perforations.” Schwartz dared a glance at Janelle and saw that her face had gone from pink to bright red. She opened her mouth to say something, but Laverne cut her off.

“You know, I just love the ones with the extra-large base. The box says it makes for a deeper, bolder experience.” Janelle choked on her drink, and Schwartz turned to see her sputtering into a glass that looked suspiciously full of moonshine.  “How much of that have you had?” he asked.  “Not enough,” she said, setting the glass down and looking at him.

The Front and Center Series:
(Clicking on the book covers will take you to Amazon.) 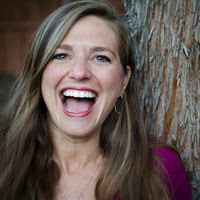 Tawna Fenske is a fourth-generation Oregonian who writes humorous fiction, risqué romance, and heartwarming love stories with a quirky twist. Her offbeat brand of romance has received multiple starred reviews from Publishers Weekly, one of which noted, “There’s something wonderfully relaxing about being immersed in a story filled with over-the-top characters in undeniably relatable situations. Heartache and humor go hand in hand.”
Tawna lives in Bend, Oregon with her husband, step-kids, and a menagerie of ill-behaved pets. She loves hiking, snowshoeing, standup paddleboarding, and inventing excuses to sip wine on her back porch. She can peel a banana with her toes and loses an average of twenty pairs of eyeglasses per year.